Marlon Brando, Jr. (April 3, 1924 – July 1, 2004) was an American actor and film director. He is hailed for bringing a gripping realism to film acting, and is widely considered to be one of the greatest and most influential actors of all time. A cultural icon, Brando is most famous for his Oscar-winning performances as Terry Malloy in On the Waterfront (1954) and Vito Corleone in The Godfather (1972), as well as influential performances in A Streetcar Named Desire (1951), Viva Zapata! (1952), Julius Caesar (1953), The Wild One (1953), Reflections in a Golden Eye (1967), Last Tango in Paris (1972) and Apocalypse Now (1979). Brando was also an activist, supporting many causes, notably the African-American Civil Rights Movement and various American Indian Movements.

“Ride Out Boy And Send It Solid, From The Greasy Polack you will someday arrive at the gloomy dane”. Tennessee Williams’s heartfelt (if politically incorrect) telegram to Marlon Brando, on the opening night of A Streetcar Named Desire more than fifty years ago, got it right and got it wrong. The young actor, in his first starring role, sent it solid all right – sent it immortally. His performance as Stanley Kowalski, later repeated on film, provided one of our age’s emblematic images, the defining portrait of mass man – shrewd, vulgar, ignorant, a rapacious threat to all that is gentle and civilized in our culture. He gave us something else too, this virtually unknown twenty-three-year-old actor. For when the curtain came down at the Ethel Barrymore Theater on December 3, 1947, our standards for performance, our expectations of what an actor should offer us in the way of psychological truth and behavioral honesty, were forever changed.

But Brando, that heartbreakingly beautiful champion of the Stanislavskian revolution in acting, never arrived at Hamlet. Never even come close. He would go on to give us a few great things, and a few near great things, but eventually he would abandon himself, as every tabloid reader knows, to suet and sulks, self loathing and self-parody. The greatness of few major cultural figures of our century rests on such a spindly foundation. No figure of his influence has so precariously balanced a handful of unforgettable achievements against a brimming barrelful of embarrassments.

And yet the reverence in which he is held by his profession is unshakable. His sometime friend and co-star Jack Nicholson said it simply and best: “He gave us our freedom”. By which he meant that Brando’s example permitted actors to go beyond characterizations that were merely well made, beautifully spoken, and seemly in demeanor; allowed them to play not just a script’s polished text but it rough, conflicting subtext as well.

Stanley Kowalski, for example, may be a brute. But he’s also a funny brute, slyly, sexily testing the gentility and hypocrisies by which his sister-in-law, Blanche DuBois, lives as they contend for the soul of Stella, his wife and her sister. Streetcar’s director, Elia Kazan, loved his performance because the way Brando “challenges the whole system of politeness and good nature and good ethics and everything else”. It was, of course, this rebelliousness that made Brando a hero to kids growing up in the 1950s – and made him a star.

But there was more to his gift than his sometimes-mumbled challenge to convention, both middle class and theatrical. Had to be, or he would have been no more than a momentary phenomenon. Kazan found in the man-boy he made into a star “a soft, yearning, girlish side and a dissatisfaction that can be dangerous”. There’s a hell of a lot of turmoil there”, he said. “He’s uncertain about himself and he’s passionate, both at the same time”. The performances that defined Brando’s screen character, and that somehow articulated the postwar generation’s previously inarticulate disgust with American blandness and dishonesty, its struggles to speak its truest feelings, are powered by that rough ambivalence. The rage and self-pity of his grievously wounded paraplegic in The Men, the rebel angle of The Wild One, above all On the Waterfront’s Terry Malloy, the dock walloper struggling for transcendence – these roles informed our aching hearts at the time, and go on tearing at us when we reencounter them. 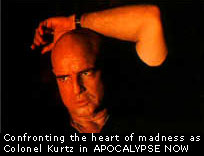 All these movies were small, intense, black-and-white, ideally suited to the psychological realism of the Stanislavskian Method, as it came to be known; ideally suited, as well, to Brando’s questing spirit. But in the 1950s, as he reached the height of his powers, Hollywood sank to the nadir of its strength. Competing with TV, it embraced color, wide screen, spectacle – and was looking for bold, uncomplicated heroes to fill its big, empty spaces, Brando looked (and felt) ludicrous in this context.

Worse, his own admirers kept piling pressure on him. An actor and friend named William Redfield spoke for them all when he said, “We believe in him not just as an actor, but as an artistic, spiritual and specifically American leader”. But this was not a role that suited him, for there was nothing in his nature that he could draw on to fill it out. The son of alcoholics – a stern taciturn father, a sweet, culturally aspiring mom – he had drifted to New York City and into acting when he was expelled from the military school that was supposed to shake the flakiness from his soul.

His first and most influential acting teacher, Stella Adler, thought him “the most keenly aware, the most keenly aware, the most empathetic human being alive”, yet thought his commitment to acting was, at best, “touch and go”. But the work, the community he found among New York’s eager young actors, gave shy, sly Bud Brando two things he never had before – a sense of identity and a sense of direction.

So he had found himself in his work. But he had not been looking for a cause to lead. It was a historical accident that he appeared to those idealistic rebel against theatrical tradition, the Stanislavskians, as the messiah they had sought for decades – he genius-hunk who could sexily take their case to the starstruck public, help them reform not just acting technique but the whole corrupt Broadway-Hollywood way of doing business.

It was the wrong role for him. He could talk their talk and walk their walk, but he wasn’t truly a Method actor; he was much more an observer of others than an explorer of his own depths. And even that was hard for him. “There comes a time in life when you don’t want to do it anymore”, he once said. “You know a scene is coming where you will have to yell or cry or scream and it’s always bothering you, always eating away at you”. Besides, as Kazan said, “It’s not a natural thing for a man to be actor”, especially, he thought, in the “trivial” climate of that moment. There was no way Brando was going to add cultural heroism to the rest of his burdens.

By the 1960s, Brando’s interviews – and his work – were growing more cynical. Acting, he said, was the expression “of a neurotic impulse”, a “self-indulgence”. Any pretensions to art he may have harbored were now just “a chilly hope”. Far from being a culture’s hero, he became its Abominable Snowman, flitting through the shadows of bad movies, becoming a blur on the paparazzi’s lenses. Twice he paused in his flight to remind us of the greatness that might have been – with his curiously affecting menace in The Godfather, with the ruined grandeur of Last Tango in Paris. That was more than a quarter – century ago, but in a way, that was enough. For the passing years have taught us this: refusing to rally a revolution, Marlon Brando still managed to personify it. His shadow now touches every acting class in America, virtually every movie we saw, every TV show we tune in. We know too that the faith vested in his example by all the De Niros and Pacinos, and, yes the Johnny Depps and Leonardo DiCaprios, was not misplaced. Marlon Brando may have resisted his role in history, may even have travestied it, but, in end, he could not evade it.