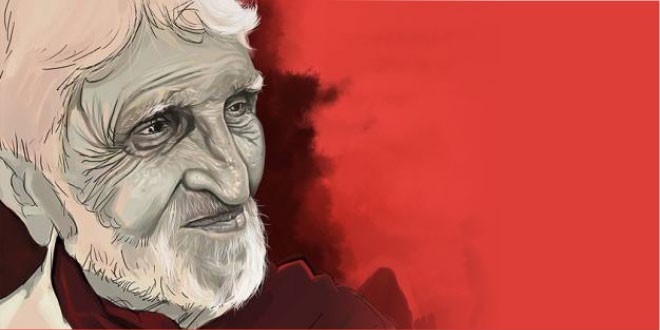 Maqbool Fida Husain (17 September 1915 – 9 June 2011) commonly known as M.F. Husain, was an Indian painter and Film Director. In 1967, He has received the National Film Award for Best Experimental Film for Through The Eyes of a Painter. In 2004, he directed Meenaxi: A Tale of Three Cities, which was screened in the Marché du Film section of the 2004 Cannes Film Festival.

Husain was associated with Indian modernism in the 1940s. His narrative paintings, executed in a modified Cubist style, can be caustic and funny as well as serious and sombre. His themes—sometimes treated in series—include topics as diverse as Mohandas K. Gandhi, Mother Teresa, the Ramayana, the Mahabharata, the British raj, and motifs of Indian urban and rural life. One of the most celebrated and internationally recognized Indian artists of the 20th century, he also received recognition as a printmaker.

Years ago, I had accompanied Husain to a Hindi movie. Barely 10 minutes after it began Husain was up on his feet, insisting that we leave the hall. Reason? He had found out what he needed to and there was no point wasting two-and-a-half hours watching the entire film. This shadow of restlessness has always hovered over Husain, the man and the artist. It’s a restlessness with which he moves from city to city, and friend to friend. And it’s the same attribute that prevents him from pursuing a concept in depth and exploring a fullness that his incisive mind is so capable of.

For Husain, there’s a constant need to discover something fresh. An experience that is reflected In his works as well. Whether it is “Zaheen”, “Between Spider and the Lamp”, “Voices” or his series on the Mahabharata and the Ramayana, that freshness comes out instantly.

The love for all things new finds Husain at home in all places. He has journeyed a long way from his oneroom accommodation in Badarbagh that doubled up as his studio and living room for his rather large family to a sprawling flat at Nariman Point; and from a cubby hole-with no toilet-in Hotel Flora at Delhi’s Jama Masjid to a suite in one of the poshest hotels in London’s Picadilly Circus. But it’s made no difference to him.

Somewhere deep in his heart, Husain is an ascetic person. At the same time he is fuelled by a passion for leading a full life. I still remember how withdrawn he had been in London in 1997. Deeply hurt by the violent protests in India against him, he could not fathom the anger behind them. A criminal case was being filed against him for depicting a goddess in the nude. There were rumours that he would be arrested when he landed in India. He was advised not to go back and the idea saddened him. But once the storm blew over, Husain was his sprightly self again.

Never one to refuse help, Husain makes sure he gets his due. In the earlier days when upcoming artists would go to him for help, he would persuade some of his affluent friends to buy their paintings. Once after the sale of one my paintings, insisted that we celebrate. We ended up in a restaurant where he ordered the most expensive item on the menu.

His zest for life is almost contagious. When he and I drove up to Varanasi once, we decided to do some sketches. The trip left a deep impact us. Varanasi in fact occupies a special place in Husain’s film, Gajagamini. Besides posing the challenges of a new medium for him, Gajagamini has been an enriching experience, making him take “revolutionary” decisions. His desire to experiment in other fields of creative life has seen him dabble in architecture, photography, poetry-writing, autobiographical sketches, even furniture-making.

As an artist he takes much credit for ensuring the patronage of Indian art by industrialists and others. In a novel interface, he began to paint murals in buildings in full public view. His unconventional gestures and his personality lent a certain awe to his works, and touched Indian art as a whole.

In the 1990s some of Husain’s works became controversial because of their portrayal of Hindu deities in the nude or in an allegedly sexual manner. The paintings in question were created in 1970, but did not become an issue until 1996, when they were printed in Vichar Mimansa, a Hindi monthly magazine, which published them in an article headlined “M.F. Husain: A Painter or Butcher”. In response, eight criminal complaints were filed against Husain. In 2004, Delhi High Court dismissed these complaints of “promoting enmity between different groups … by painting Hindu goddesses – Durga and Sarswati, that was later compromised by Hindu’s.”

In 1998 Husain’s house was attacked by Hindu groups like Bajrang Dal and art works were vandalised. The leadership of Shiv Sena endorsed the attack. Twenty-six Bajrang Dal activists were arrested by the police. Protests against Husain also led to the closure of an exhibition in London, England.

In February 2006, Husain was charged with hurting sentiments of people because of his nude portraits of Hindu gods and goddesses.

A series of cases were brought against him and a court case related to the alleged obscene depiction of Hindu goddesses in his paintings resulted in issuing a non-bailable warrant against Husain after he failed to respond to summons. There were also reportedly death threats. The artist left the country stating that “matters are so legally complicated that I have been advised not to return home”.

In the February 6, 2006 issue, India Today, a national English weekly published an advertisement titled “Art For Mission Kashmir”. This advertisement contains a painting of Bharatmata (Mother India) as a nude woman posed across a map of India with the names of Indian States on various parts of her body. The exhibition was organised by Nafisa Ali of Action India (NGO) and Apparao Art Gallery. Organizations like Hindu Jagruti Samiti and Vishva Hindu Parishad (VHP) have protested persistently against Husain displaying the painting on the websites and even in exhibitions in north Europe. As a result, on February 7, 2006 Husain apologised and promised to withdraw the painting from an auction. The painting later appeared on Husain’s official website.

Meenaxi: A Tale of Three Cities

Husain’s film Meenaxi: A Tale of Three Cities was pulled out of movie theatres a day after some Muslim organisations raised objections to one of the songs in it. The All-India Ulema Council complained that the Qawwali song Noor-un-Ala-Noor was blasphemous. It argued that the song contained words directly taken from the Quran. The council was supported by Muslim organisations like the Milli Council, All-India Muslim Council, Raza Academy, Jamiat-ul-Ulema-e-Hind and Jamat-e-Islami. Husain’s son stated that the words were a phrase referring to divine beauty that were being sung by the central character played by Tabu. He said there was no intention to offend. Following the wave of protests the enraged artist pulled off his movie from the theaters. The movie was well received by the critics, however, and went on to win various awards.

MF Husain died aged 95 on 9 June 2011 after being unwell for several months. He died at the Royal Brompton Hospital in London, and is due to be buried in the city on 10 June 2011. India’s Prime Minister, Manmohan Singh said his death was a “national loss”, and India’s President Pratibha Patil said his death “left a void in the world of art.” The actress Shabana Azmi called him an “iconoclastic painter, a wonderful human being and a very good friend”. Talking about his self-imposed exile and death outside of India painter Akbar Padamsee said that it was a “pity that a painter as important as Husain had to die outside his own country because of a crowd of miscreants”.