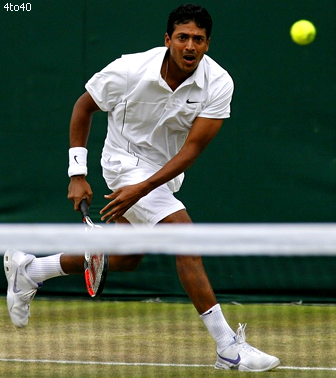 Mahesh Bhupathi is an ace tennis player. Born on 7 June 1974 in Chennai, India, he is a rarity in the Indian sporting scenario. In a career spanning for more than a decade, Bhupathi has delivered some amazing performances. He has teamed up with Leander Paes to dominate the Men’s Doubles, for quite a long time. Bhupathi is among the best doubles tennis players in the world. Apart from contributing as a team, Bhupathi has proved his dexterity in tennis by winning a number of Singles titles too.

Mahesh Bhupathi became a professional tennis player in 1995. He paired up with Leander Paes, the combination which has worked wonders for the Indian tennis. The pair won six ATP Doubles titles in 1997. Bhupathi, along with Paes, won three doubles titles, including French Open and Wimbledon, in 1999. He and Paes became the first Indian team to enter the finals of all the four Grand Slams in the same year, since 1952. Bhupathi won four doubles titles by teaming up with Paes in 2001.

In 2002, Bhupathi paired with Max Mirnyi and went on to grab the US Open Doubles title. In the same year, Bhupathi was conferred with Padma Shri, one of the highest civilian awards, for his excellence in tennis. In 2002, he partnered with Max Mirnyi and won the US Open Doubles title. In the same year, he grabbled the third Grand Slam Mixed Doubles title at Wimbledon, with Elena Likhovtseva. Bhupathi once again paired with Mirnyi in 2003, when the team reached the finals of Wimbledon Doubles. In 2004, he acquired the position among the top 10 Doubles players for the fourth successive year and sixth time in seven years.

Bhupathi teamed up with Paes to play at six more events. The pair played at Davis Cup, secured two ties and then paired to represent India at the 2004 Athens Olympic Games, wherein they managed to reach the semi-finals. Two years later, Bhupathi, along with Martina Hingis, defeated the team of Daniel Nestor and Elena Likhovtseva in the Australian Open Mixed Doubles event. In 2007, the team consisting of Bhupathi and Czech Radek Stepanek made it to the Australian Open Men’s Doubles event’s quarterfinals. In 2009, Bhupathi-Sania Mirza team grabbed the mixed doubles title at the Australian Open by defeating Nathalie Dechy (France) and Andy Ram (Israel).

Together with Paes, Mahesh Bhupathi featured in a number of Grand Slam events and went on to win some of the prestigious tournaments, including Davis Cup and Wimbledon. The pair climbed the ladder of the success, by winning a number of Doubles titles. However, due to some reasons that are still unknown, the Paes-Bhupathi relationship fluctuated, as the time passed by. It turned from good, bad to worse. Ultimately, in 2006, just after winning the Asian Games, both the players officially announced their split. They declared that they would never play together. However, even after sharing a cold relationship, the pair reunited, just to play in the 2008 Beijing Olympic Games. They, however, continue to maintain the split.