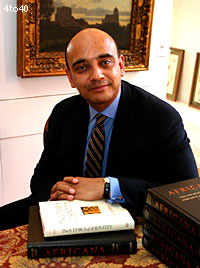 Kwame Anthony Appiah, born in London, is a Ghanaian philosopher, cultural theorist, and novelist whose interests include political and moral theory, the philosophy of language and mind, and African intellectual history. Appiah is Laurance S. Rockefeller University professor of philosophy at Princeton University and author of numerous books and novels.

The author of everything from monographs on the philosophy of language to mystery novels to essays on African literature; the editor of poetry anthologies and encyclopedias of cultural history; and a speaker of four languages, Appiah is an interdisciplinarian par excellence, a cosmopolitan thinker whose subject is nothing less than the world. Appiah’s early philosophical work dealt with probabilistic semantics and theories of meaning, but his more recent books have tackled philosophical problems of race and racism, identity, and moral theory. He has been influenced by the cosmopolitanist philosophical tradition, which stretches from German philosophers such as Hegel through W E B. DuBois and others. His fiction consists of drawing-room detective stories; none of his three novels has gained a wide audience. The first, Avenging Angel, set in the University of Cambridge, involved a murder among the Cambridge Apostles. His second and third novels are Nobody Likes Letitia and Another Death in Venice.

Appiah has been a critic of contemporary theories of Afrocentrism. In his essay Europe Upside Down: Fallacies of the new Afrocentrism, Appiah argues that current Afrocentricism is striking for, “how thoroughly at home it is in the frameworks of nineteenth century European thought.” His critique of contemporary Afrocentrism has been strongly criticized by some of its leading proponents, who have characterised his work as “anti-African”.