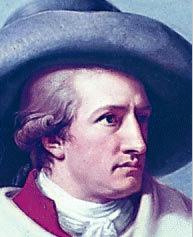 Johann Wolfgang von Goethe — Generally recognized as one of the greatest and most versatile European writers and thinkers of modern times, Johann Wolfgang von Goethe, born on Aug. 28, 1749, died on Mar. 22, 1832, profoundly influenced the growth of literary ROMANTICISM. Best known for his lyrical poetry, for the far-reaching influence of his novels, and particularly for his dramatic poem FAUST (Part 1, 1808; Part 2, 1832), Goethe also made substantial contributions to biology and to the history and philosophy of science.

For ten years a leading political figure, Goethe was an acute observer of the great social and intellectual revolutions of the late 18th century and one of the earliest thinkers to explore the implications of the Industrial Revolution.

Goethe’s major significance, however, is as an extremely sensitive and vulnerable individual who struggled through a wide range of human crises and left a critical record of this experience.

Goethe was born in Frankfurt am Main into a well-to-do middle-class family. His father, Johann, withdrew from public life and educated his children himself. Goethe’s six-volume autobiography, Aus meinem Leben: Dichtung und Wahrheit (1811-22), recalls his upbringing as a chaotic experience, but it may have been the most stimulating possible nourishment for his synthesizing mind.

At 16, Goethe began his studies at the university in Leipzig, then a leading cultural center. Here he wrote his earliest poems and plays. In 1770 at the university in Strasbourg he came under the influence of Johann Gottfried von HERDER, who introduced him to the works of Shakespeare. In 1771, Goethe received a licentiate in law at Strasbourg and during the next 4 years practiced law with his father and wrote two works that brought him literary celebrity. (See Works and Influences below.) In 1775 he was invited to the ducal court of Karl Augustus in Saxe-Weimar, where he held (1775-86) numerous high offices and spent most of the remainder of his life. During his early years there he also wrote beautiful and mysterious lyrics to Charlotte von Stein, a married woman 7 years his senior.

During a 2-year sojourn in Italy (1786-88), Goethe recognized that he was an artist and resolved to devote the rest of his life to writing. The decision did not promise to be a happy one at first; his return to Weimar was followed by years of alienation from court society. Many of his friends were offended by his living with young Christiane Vulpius, who bore him a son in 1789. To legitimize the child, Goethe married Christiane in 1806.

Goethe spent much of his time in nearby Jena and from 1794 to 1805 developed an intense collaboration with Friedrich SCHILLER, a union that many regard as a high point in German letters. However problematic Goethe’s decision to withdraw from public life may have been, it did lead to his most important literary and scientific achievements. Goethe’s creative powers persisted through his sixties and seventies, and he died in Weimar at the age of 82.

In his early twenties Goethe achieved fame in Germany with the play Goetz of Berlichingen (written, 1771; published, 1773), which scorned fashionable literary correctness, formalism, and cosmopolitanism. It drew its inspiration from Shakespeare and from Goethe’s native genius and embodied the thinking of his early friend and mentor, Herder. Soon after, Goethe became famous throughout Europe with a sentimental and individualistic novel in the style of Jean Jacques Rousseau, The SORROWS OF YOUNG WERTHER (1774). During his first ten years in Weimar, Goethe published nothing of further note, although he did collect many of his previously published works in the eight-volume Goethes Schriften (Goethe’s Writing, 1787-90).

The highly lyrical BILDUNGSROMAN (developmental novel) that Goethe worked on for much of his life, Wilhelm Meister’s Apprenticeship (1795), was a disappointment to admirers of Werther, but it was praised and emulated by the later generation of German romantic writers as the exemplary form, and it continued to influence the novel well into the 20th century.

Most celebrated during his lifetime as the author of Faust, Goethe was also known for the satirical Reynard the Fox (1794) and the rather saccharine epic Hermann and Dorothea (1798), both written in remarkably fine hexameters. His so-called classical dramas, Iphigenie auf Taurus (final version, 1787) and Torquato Tasso (1790), were much admired during the 19th century, as were the ballads he wrote in collaboration with Schiller.

Some of his mature works began to be appreciated only in the 20th century, including the second part of Faust, the subtly ironical Elective Affinities (1809), and the deeply passionate lyrical cycle, West-Eastern Divan (1819). Other works, such as the sensual hexameters of Roman Elegies (1795) and Wilhelm Meister’s Travels (1821), a highly discursive continuation of the earlier novel, are only now receiving recognition.

Goethe himself expected to be remembered as a scientist. Biology has long recognized its debt to him, especially for the concept of morphology, which is fundamental to the theory of evolution. He thought his most important work was Zur Farbenlehre (3 vols., 1810; trans. as Goethe’s Theory of Colors, 1840), in which he undertook to discredit Newtonian science. This effort brought Goethe into disrepute with 19th-century positivists, but the current emphasis on perception appears to be sympathetic to Goethe’s point of view, and the first volume of Zur Farbenlehre contains the first comprehensive history of science.

Goethe’s careful attention to sociological factors makes him an important forerunner of many modern thinkers. Similarly, current literary scholarship finds in Goethe an early advocate of concepts such as Weltliteratur, or comparative literature, and of the decisive role played by the reader in giving meaning to a literary work.

In our time Goethe is especially noted for recognizing the dehumanizing demands of the industrial epoch, particularly the demand for specialization, and for successfully meeting them without forfeiting his humanity. He was able to do so largely through the synthesizing power of his intellect and his great personal candor.

The history of Goethe criticism suggests that no generation of scholars can comprehend his entire output. Currently he is particularly admired for the humor and irony of works such as Faust and Wilhelm Meister, which were long taken quite seriously.

The full implications of his science may also elude today’s thinkers. As determinism ceases to characterize science, however, it is finding greater tolerance for a Goethean world in which all phenomena tend to merge. To him, poetry and science were one. Wide-eyed, astonished, but intensely participative, he surveyed the larger context of every human experience.