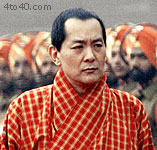 King Jigme Singye Wangchuck, great-grandson of Bhutan’s first hereditary monarch and once the world’s youngest King (when he came to power in 1972), rules his people more in the spirit of Buddha than of more worldly princes. To this day there is not a traffic light in the Himalayan kingdom, by law everyone must wear traditional 14th century clothing and the number of tourists allowed into the country over the past 10 years is lower than the number of fans who pile into a college football game. Television and the Internet have, it is true, arrived with the 21st century, and a few super luxury hotels are now coming up around Bhutan, but what hits you when you touch down in its only airport is the silence.

Almost 30 years ago, long before “positive psychology” became a boom in the West, King Jigme, now 50, suggested that nations be measured by “gross national happiness”; the rich are not always happy, after all, while the happy generally consider themselves rich. Four months ago, he launched an even more radical idea: self-deposition. To urge his people toward independence, he announced that he would step down two years from now (his son would officially take over) and that his country would hold its first national democratic elections.

King Jigme – who gave up absolute power in 1998 and last year sent every household in the land a new draft constitution that allowed for his impeachment – is setting a quietly revolutionary precedent. If most politicians are inherently suspect because they seem so eager to grab power and so reluctant to surrender it, what does one make of a leader who voluntarily gives up his position, as if placing his people’s needs before his own?