1954: Defeats the French at Dien Bien Phu; Vietnam is divided, and Ho becomes the first president of North Vietnam

An emaciated, goateed figure in a threadbare bush jacket and frayed rubber sandals, Ho Chin Minh cultivated the image of a humble, begin “Uncle Ho”. But he was seasoned revolutionary and passionate nationalist obsessed by single goal: independence for his country. Sharing his fervor, his tattered guerrillas vaulted daunting obstacles to crush France’s desperate attempt to retrieve its empire in Indochina; later, built build into a largely conventional army, they frustrated the massive U.S effort to prevent Ho’s communist followers from controlling Vietnam. For Americans, it was longest war – and the first defeat – in their history, and it drastically changed the way they perceived their role in the world.

To Western eyes, it seemed inconceivable that Ho would make the tremendous sacrifice he did. But in 1946, as war with the French loomed, he cautioned them, “You can kill ten of my men for every one I kill of yours, yet even at those odds, you will lose and I will win”. The French, convinced of their superiority, ignored his warning and suffered grievously as a result. Senior American officers similarly nurtured the illusion that their sophisticated weapons would inevitably break enemy morale. But, as Ho’s brilliant commander, General Vo Nguyen Giap, told me in Hanoi in 1990, his principal concern had been victory. When I asked him how long he would have resisted the U.S. onslought, he thundered, “Twenty years, maybe a hundred years – as long as it took to win, regardless of cost”. The human toll was horrendous. An estimated three million North and South Vietnamese soldiers and civilians died.

The youngest of three children, Ho was born Nguyen Sinh Cung in 1890 in a village in central Vietnam. The area was indirectly ruled by the French through a puppet emperor. Its impoverished peasants, traditional dissidents, opposed France’s presence; and Ho’s father, a functionary at the imperial court, manifested his sympathy for them by quitting his position and becoming a itinerant teacher. Inheriting his father’s rebellious bent, Ho participated in a series of tax revolts, acquiring a reputation as a troublemaker. But he was familiar with the lofty French principles of liberte, egalite, fraternite and yearned to see them in practice in France. In 1911 he sailed for Marseilles as a galley boy aboard a passenger liner. His record of dissent had already earned him a file in the French police dessiers. It was scarcely flattering: “ Appearance awkward… mouth half-open”.

In Paris, Ho worked as a photo retoucher. The city’s fancy restaurants were beyond his means, but he indulged in one luxury – American cigarettes, preferably Camels or Lucky Strikes. Occasionally he would drop into a music hall to listen to Maurice Chevalier, whose charming songs he would never forget.

In 1919, Woodrow Wilson arrived in France to sign the treaty ending World War I, and Ho, supposing that the President’s doctrine of self-determination applied to Asia, donned a cutaway coat and tried to present Wilson with a lengthy list of French abuses in Vietnam. Rebuffed, He joined the newly created French Communist Party. “It was patriotism, not communism, that inspired me”, he later explained.

Soon Ho was roaming the earth as a covert agent for Moscow. Disguised as a Chinese journalist or a Buddhist monk, he would surface in Canton, Rangoon, or Calcutta – then vanished to nurse his tuberculosis and other chronic diseases. As befit a professional conspirator, he employed a baffling assortment of aliases. Again and again, he was reported dead, only to pop up in a new place. In 1929 he assembled a few militants in Hong Kong and formed the Indochinese Communist Party. He portrayed himself as a celibate, a pose calculated to epitomize his moral fiber, but he had atleast two wives or perhaps concubines. Once was a Chinese woman; the other was Giap’s sister-in-law, who was guillotined by the French. 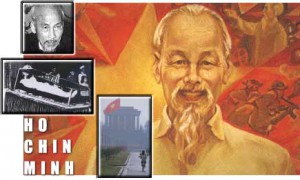 In 1940, Japan’s legions swept into Indochina and French officials in Vietnam, loyal to the pro-German Vichy administration in France, collaborated with them. Nationalists in the region greeted the Japanese as liberators, but to Ho they were no better than the French. Slipping across the Chinese frontiers into Vietnam – his first return home in three decades – he urged his disciples to fight both the Japanese and the French. There, in a remote camp, he founded the Viet Minh, a acronym for the Vietnam Independence League, from which he derived his nom de guerre, Ho Chin Minh – roughly “Bringer of light”.

What he brought was a spirit of rebellion – against first the French and later the Americans. As Ho’s war escalated in the mid-1960s, it became clear to Lyndon Johnson that Vietnam would imperil his presidency. In 1965, Johnson tried a diplomatic approach. Accustomed to dispensing patronage to recalcitrant congressmen, he was confident that the tactic would work. “Old Ho can’t turn me down”, L.B.J said. But Ho did. Any settlement, he realized, would mean accepting a permanent partition and forfeiting his dream of unify Vietnam under one flag.

There was no flexibility in Ho’s beliefs, no bending of his will. Even as the war increasingly destroyed the country, he remained committed to Vietnam’s independence. And millions of Vietnamese fought and died to attain the same goal.

He died on September 2, 1969, at the age of seventy-nine, some six years before his battalions surged into Saigon. Aspiring the bask in the reflected glory of his posthumous triumph, his heirs put his embalmed body on display in a hideous granite mausoleum copied from Lenin’s tomb in Moscow. They violated his final wishes. In his will he specified that his ashes be buried in urns on three hilltops in Vietnam, saying, “ Not only is cremation good from the point of view of hygiene, but it also saves farmland.

Share
Previous What is origin of the term Bluetooth?
Next What is PayPal?