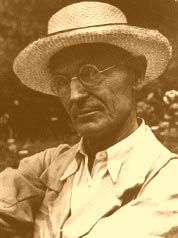 Hermann Hesse (July 2, 1877 – August 9, 1962) was a German Swiss Poet, Novelist, & Painter. In 1946, he received the Nobel Prize in Literature. His best-known works include Steppenwolf, Siddhartha, and The Glass Bead Game (also known as Magister Ludi), each of which explores an individual’s search for authenticity, self-knowledge and spirituality.

Hermann Hesse was born on 2 July 1877 in the Black Forest town of Calw in Wurttemberg, Germany. Both of Hesse’s parents served in India at a mission under the auspices of the Basel Mission, a Protestant Christian missionary society. Hesse’s mother, Marie Gundert, was born at such a mission in India in 1842. In describing her own childhood, she said, “A happy child I was not…” As was usual among missionaries at the time, she was left behind in Europe at the age of four when her parents went to India. In her teens she attempted to rebel against her authoritarian father, Hermann Gundert, but finally submitted.

Hesse’s father, Johannes Hesse, the son of a doctor, was born in 1847 in the Estonian town of Paide (Weissenstein). In his own way, Dr Hesse was just as tyrannical as Dr Gundert. Once Johannes Hesse was married, he moved into his father-in-law’s house. Due at least in part to the crowded conditions there, in 1889 he suffered his first bout of deep depression. He continued to have such attacks of “melancholia, weeping and headaches” for the rest of his life.

Since Johannes Hesse belonged to the sizable German minority in that part of the Baltic region, which was then under the rule of the Russian Empire, his son Hermann was at birth both a citizen of the German Empire and of the Russian Empire. Hesse had five siblings, two of whom died in infancy. In 1873, the Hesse family moved to Calw, where his father worked for the Calwer Verlagsverein, a publishing house specializing in theological texts and schoolbooks. Hesse’s grandfather Hermann Gundert managed the publishing house at the time, and Johannes Hesse succeeded him in 1893.

Hesse grew up in a Swabian Pietist household, with its strong tendency to insulate believers into small, deeply thoughtful groups. Furthermore, Hesse described his father’s Baltic German heritage as “an important and potent fact” of his developing identity. His father, Hesse stated, “always seemed like a very polite, very foreign, lonely, little-understood guest.” His father’s tales from Estonia instilled a contrasting sense of religion in young Hermann. “[It was] an exceedingly cheerful, and, for all its Christianity, a merry world… We wished for nothing so longingly as to be allowed to see this Estonia … where life was so paradisiacal, so colorful and happy.” Hermann Hesse’s sense of estrangement from the Swabian petty bourgeoisie further grew through his relationship with his grandmother Julie Gundert, née Dubois, whose French-Swiss heritage kept her from ever quite fitting in among that milieu.

From early on, Hermann Hesse appeared headstrong and hard for his family to handle. In a letter to her husband Johannes Hesse, Hermann’s mother Marie wrote: “The little fellow has a life in him, an unbelievable strength, a powerful will, and, for his four years of age, a truly astonishing mind. How can he express all that? It truly gnaws at my life, this internal fighting against his tyrannical temperament, his passionate turbulence […] God must shape this proud spirit, then it will become something noble and magnificent — but I shudder to think what this young and passionate person might become should his upbringing be false or weak.”

Hesse showed signs of serious depression as early as his first year at school.

In his juvenilia collection Gerbersau, Hesse vividly describes experiences and anecdotes from his childhood and youth in Calw: the atmosphere and adventures by the river, the bridge, the chapel, the houses leaning closely together, hidden nooks and crannies, as well as the inhabitants with their admirable qualities, their oddities, and their idiosyncrasies. The fictional town of Gerbersau is pseudonymous for Calw, imitating the real name of a nearby town called Hirsau. It is derived from the German words gerber, meaning “tanner,” and aue, meaning “meadow.” Calw had a centuries-old leather-working industry, and during Hesse’s childhood the tanneries’ influence on the town was still very much in evidence. Hesse’s favorite place in Calw was the St. Nicholas-Bridge (Nikolausbrücke), which is why the Hesse monument by the sculptor Kurt Tassotti was erected there in 2002.

Hermann Hesse’s grandfather Hermann Gundert, a doctor of philosophy and fluent in multiple languages, encouraged the boy to read widely, giving him access to his library, which was filled with the works of world literature. All this instilled a sense in Hermann Hesse that he was a citizen of the world. His family background became, he noted, “the basis of an isolation and a resistance to any sort of nationalism that so defined my life.”

Young Hesse shared a love of music with his mother. Both music and poetry were important in his family. His mother wrote poetry, and his father was known for his use of language in both his sermons and the writing of religious tracts. His first role model for becoming an artist was his half-brother, Theo, who rebelled against the family by entering a music conservatory in 1885. Hesse showed a precocious ability to rhyme, and by 1889-90 had decided that he wanted to be a writer.

Share
Previous What is grid computing?
Next What is history sniffing?