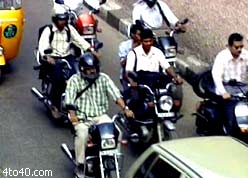 Dr. Subroto Das — Ahmedabad: Just how many times have we seen an accident on the city road or the highway and moved past as we didn’t have the time or energy to involve ourselves into police matters?

On August 21, 2002, Dr Subroto Das and his wife were driving on the National Highway 8 to Baroda when their vehicle crashed into a tree.

Seriously injured, the couple waited for help. It was almost after four hours that help arrived. While Das and his wife survived, the incident shook them. Each year more than 90,000 people die in road accidents on the highways because of delayed evacuation. Das took on the challenge of catering to this problem by setting up lifeline foundation – a highway rescue project that promises help to all accident victims in exactly 20 minutes. At that time an idea of integrated and centralised network of ambulances and other rescue utilities was developed, a concept unheard of and never practiced. Without owning a single facility, they spent three years networking, ambulances, cranes, metal cutters, police facilities, hospitals and blood banks to launch Highway Rescue Project on National Highway Number 8 between Ahmedabad and Surat on 1st July 2002. Painfully mapping the highway, developing software to locate caller (without GPS), setting up a 24 hour control room with no precedence of this magnitude in South Asia, we with our team has extended Highway Rescue Project to 712 kms of highways in Gujarat. These efforts are recognized by WHO and UNDP, and are planning to take Highway Rescue Project to other states.

“The first step was to ensure help reached during the golden hour, upgrading the existing providers hospitals ambulances,” he says. 108 ambulances are networked in this stretch of 712 kms. Upon receiving a distress call, the central control room in Baroda notifies the nearest ambulance from the site of the accident. Then a hospital is informed. Similarly Hospitals near the highways (maximum distance 3 kms from the highway) have been graded depending upon the availability of infrastructure and manpower. All multi disciplinary hospitals and trauma care set-ups are part of the network. Admission procedures in these hospitals have been simplified and standardised to make it easier for them to accept and handle accident cases. Simultaneously a police station is also informed. Das plans to do more and extend these services to other parts of the country as well.

Highway Rescue project till date has saved more than 608 lives and limbs of seriously injured accident victims besides responding to distress calls of another 650 with minor and moderate injuries. They have recently awarded RED & WHITE BRAVERY GOLD AWARD in the social acts of courage category. So the next time there is trouble on the highway, help could be just a phone call away.

Share
Previous Why are the Nazca drawings one of the great mysteries of archaeology?
Next Why does a Boomerang return?