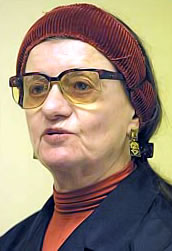 Diana Baumrind — Diana Blumberg Baumrind was born on August 23, 1927. She is a clinical and developmental psychologist. Baumrind was born into a small jewish community in New York City, the first of two daughters of Hyman and Mollie Blumberg. She completed her B.A. in Psychology and Philosophy at Hunter College in 1948, and her M.A. and Ph.D. in Psychology at the University of California, Berkeley. Her doctoral dissertation was entitled “Some personality and situational determinants of behavior in a discussion group”. After being awarded her doctorate she served as a staff psychologist at Cowell Memorial Hospital in Berkeley. She was also director of two U. S. Public Health Service projects and a consultant on a California state project. From 1958-1960 she had a private practice in Berkeley. She is a clinical and developmental psychologist at the Institute of Human Development, University of California, Berkeley. She is known for her research on parenting styles and for her critique of deception in psychological research, especially Stanley Milgram’s controversial experiment.

Her parenting styles were based on two aspects of parenting that are found to be extremely important. The first was “Parental responsiveness”, which refers to the degree the parent responds to the child’s needs. The second was “Parental demandingness” which is the extent to which the parent expects more mature and responsible behavior from a child. Using these two dimensions, she recognizes three different parenting styles:

Permissive (“Too Soft”): this parenting style is characterized by low demandingness with high responsiveness. The permissive parent is overly responsive to the child’s demands, seldom enforcing consistent rules. The “spoiled” child often has permissive parents.

Baumrind has studied the effects of corporal punishment on children, and has concluded that mild spanking, in the context of an authoritative (NOT authoritarian) parenting style, is unlikely to have a significant detrimental effect, if one is careful to control for other variables such as socioeconomic status. She observes that previous studies demonstrating a correlation between corporal punishment and bad outcomes failed to control for variables such as socioeconomic status. Low-income families are more likely to employ corporal punishment compared with affluent families. Children from low-income neighborhoods are more likely to commit violent crimes compared with children from affluent neighborhoods. But when appropriate controls are made for family income and other independent variables, Baumrind believes that mild corporal punishment per se does not increase the likelihood of bad outcomes. This assertion has in turn attracted criticism and counter-points from other researchers in the same publication, for example: Whether harmful or not, there is still no consistent evidence of beneficial effects.