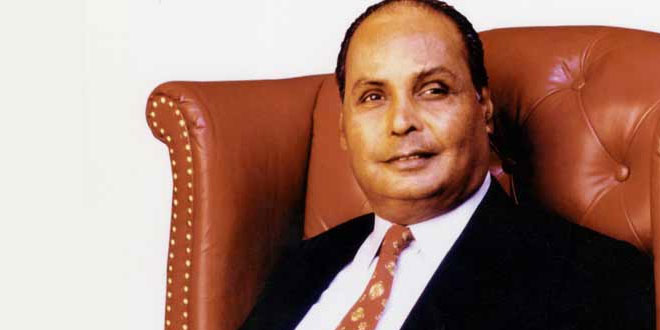 Dhirubhai started off as a small time worker with Arab merchants in the 1950s and moved to Mumbai in 1958 to start his own business in spices. After making modest profits, he moved into textiles and opened his mill near Ahmedabad. Dhirubhai founded Reliance Industries in 1958. After that it was a saga of expansions and successes.

Reliance, acknowledged as one of the best-run companies in the world has various sectors like petrochemicals, textiles and is involved in the production of crude oil and gas, to polyester and polymer products. The companies refinery at Jamnagar accounts for over 25% of India’s total refining capacity and their plant at Hazira is the biggest chemical complex in India. The company has further diversified into Telecom, Insurance and Internet Businesses, the Power Sector and so on. Now the Reliance group with over 85,000 employees provides almost 5% of the Central Government’s total revenue.

Dhirubhai has been one among the select Forbes billionaires and has also figured in the Sunday Times list of top 50 businessmen in Asia. His industrious nature and willingness to take on any risk has made him what he is. In 1986 after a heart attack he has handed over his empire to his two sons Anil and Mukesh. His sons are carrying on the successful tradition of their illustrious father.

‘Dhirajlal Hirachand Ambani’ was born on 28 December 1932, at Chorwad, Junagadh in the state of Gujarat, India, into a Modh family of very moderate means. He was the second son of a school teacher. When he was 16 years old, he moved to Aden, Yemen. Initially, Dhirubhai worked as a dispatch clerk with A. Besse & Co. Two years later A. Besse & Co. became the distributors for Shell products and Dhirubhai was promoted to manage the company’s oil-filling station at the port of Aden.

He was married to Kokilaben and had two sons and two daughters. He also worked in Dubai for some time during his early years.

Kokilaben and Dhirubhai Ambani, In the 1950s, the Yemini administration realized that their main unit of currency, the Rial, was disappearing fast. Upon launching an investigation, they realized that a lot of Rials were being routed to the Port City of Aden. It was found that a young man in his twenties was placing unlimited buy orders for Yemini Rials.

During those days, the Yemini Rial was made of pure silver coins and was in much demand at the London Bullion Exchange. Young Dhirubhai bought the Rials, melted them into pure silver and sold it to the bullion traders in London. During the latter part of his life, while talking to reporters, it is believed that he said “The margins were small but it was money for jam. After three months, it was stopped. But I made a few lakhs. In short, I was a manipulator. A very good manipulator. But I don’t believe in not taking opportunities.

The business was setup in partnership with Champaklal Damani, his second cousin, who used to be with him in Aden, Yemen. The first office of the Reliance Commercial Corporation was set up at the Narsinathan Street in Masjid Bunder. It was a 350 Sq. Ft. room with a telephone, one table and three chairs. Initially, they had two assistants to help them with their business. In 1965, Champaklal Damani and Dhirubhai Ambani ended their partnership and Dhirubhai started on his own. It is believed that both had different temperaments and a different take on how to conduct business. While Mr. Damani was a cautious trader and did not believe in building yarn inventories, Dhirubhai was a known risk taker and he considered that building inventories, anticipating a price rise, and making profits through that was good for growth.

During this period, Dhirubhai and his family used to stay in an one bedroom apartment at the Jaihind Estate in Bhuleshwar. Mumbai. In 1968, he moved to an up market apartment at Altamount Road in South Mumbai.

Sensing a good opportunity in the textile business, Dhirubhai started his first textile mill at Naroda, near Ahmedabad in the year 1966. Textiles were manufactured using polyester fibre yarn. Dhirubhai started the brand “Vimal”, which was named after his elder brother Ramaniklal Ambani’s son, Vimal Ambani. Extensive marketing of the brand “Vimal” in the interiors of India made it a household name. Franchise retail outlets were started and they used to sell “only Vimal” brand of textiles. In the year 1975, a Technical team from the World Bank visited the Reliance Textiles’ Manufacturing unit. This unit has the rare distinction of being certified as “excellent even by developed country standards” during that period.

Dhirubhai Ambani was admitted to the Breach Candy Hospital in Mumbai on June 24, 2002 after he suffered a major “brain stroke”. This was his second stroke, the first one had occurred in February 1986 and had kept his right hand paralyzed. He was in a state of coma for more than a week. A battery of doctors were unable to save his life. He breathed his last on July 6, 2002, at around 11:50 P.M. (Indian Standard Time).

His funeral procession was not only attended by business people, politicians and celebrities but also by thousands of ordinary people. His elder son, Mukesh Ambani, performed the last rites as per Hindu traditions. He was cremated at the Chandanwadi Crematorium in Mumbai at around 4:30 PM (Indian Standard Time) on July 7, 2002.

He is survived by Kokilaben Ambani, his wife, two sons, Mukesh Ambani and Anil Ambani, and two daughters, Nina Kothari and Deepti Salgaocar.

Dhirubhai Ambani started his long journey in Bombay from the Mulji-Jetha Textile Market, where he started as a small-trader. As a mark of respect to this great businessman, The Mumbai Textile Merchants’ decided to keep the market closed on July 8, 2002. At the time of Dhirubhai’s death, Reliance Group had a gross turnover of Rs. 75,000 Crore or USD $ 15 Billion. In 1976-77, the Reliance group had an annual turnover of Rs 70 crore and Dhirubhai had started the business with Rs.15,000.