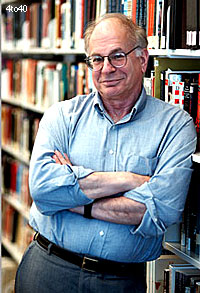 Kahneman has written of his experience in Nazi-occupied France, explaining in part why he entered the field of psychology: It must have been late 1941 or early 1942.

Jews were required to wear the Star of David and to obey a 6 p.m. curfew. I had gone to play with a Christian friend and had stayed too late. I turned my brown sweater inside out to walk the few blocks home.

As I was walking down an empty street, I saw a German soldier approaching. He was wearing the black uniform that I had been told to fear more than others – the one worn by specially recruited SS soldiers. As I came closer to him, trying to walk fast, I noticed that he was looking at me intently.

Then he beckoned me over, picked me up, and hugged me. I was terrified that he would notice the star inside my sweater. He was speaking to me with great emotion, in German.

When he put me down, he opened his wallet, showed me a picture of a boy, and gave me some money. I went home more certain than ever that my mother was right: people were endlessly complicated and interesting.