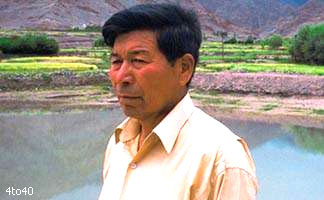 To a traveler, Ladakh is a place of immense natural beauty. But to the people who live in the place, it is a cold desert where survival depends on careful use of sparse natural resources including water.

However, a man is making a huge difference in the lives of the Ladakhis.

Chewang Norphel fondly known as a glacier man is a retired civil engineer, who figured out a way to trap the waters that melt down the high mountains.

He turns them into chunks of ice or artificial glaciers, which in the summer irrigate the water-starved fields.

”Whenever I visited the villages, the people complained of shortage of water. I had to think day and night. Ladakh is very cold during the winters so one day we took advantage of the winters and came up with the idea of storing water in the form of ice,” says Norphel.

An innocent face bereft of expression. Inscrutable eyes. Stocky build. His appearance can be deceptive. So is the simplicity of his thought. Almost unreal. Meet Chewang Norphel, 62, retired civil engineer. He makes zings (tanks). And artificial glaciers.

There is hardly anything about him that seems unusual. It takes some time to adjust to Norphel’s common-sense approach to life. Yet it is this uncommon gift which gives him away. It explains how this man could generate water and greenery in the barren landscape that is Ladakh.

Falling in the rain-shadow area of the Himalaya, Ladakh is a cold, mountainous desert. During winter, temperature drops below the -30°c mark. Annual average rainfall is 50 mm. Dearth of water is the most important problem. The only source is glacier water from the mountains. They melt in summer, releasing the little water that the people of Ladakh get. This water is however managed by the people with the utmost care. It is stored for use throughout the year. Small wonder Norphel realised the importance of water.

Coming from a middle class family of Leh, Norphel went to Amar Singh College in Srinagar as a student of science. He completed a diploma course in civil engineering from Lucknow in 1960. In June 1960, he joined the rural development department of Jammu and Kashmir in Ladakh as a civil engineer.

”There is scarcely a village in Ladakh where I have not made a road, a culvert, a bridge, a building or an irrigation system,” says Norphel, who is quite fluent in both Hindi and English. Travelling far and wide in Ladakh, he does not remember when he developed his interest in water. His job was also making zings (small tanks fed by run-off from melting glaciers).

”I realised that all the problems in the region were related to water. In most areas, it was scarce. In others, it was being wasted,” he says. “The best way to deal with this is the construction of clean, efficient channels.” The channels he makes bring water from distant areas with minimal losses.

It was while working on the zings and channels that he evolved the idea of making an artificial glacier. His method involves channelling glacier water to the shadow area of a mountain, covered from the sunlight. He puts in half-inch-wide iron pipes perpendicular to the edge of the depression where the water collects.

After seeping into the pipe the water freezes. As more water seeps in, it pushes out the frozen block. This also freezes, continuing the cycle. On the other side emerges a neat, artificial glacier.

How does he manage to freeze water in the pipes? Another simple observation. “I noticed in Leh that water did not freeze in the channels but did so in the thin iron pipes. As the pipes are made of metal and are very thin, they lose heat quite rapidly,” he narrates, just as if he was telling you how he brushes his teeth. He has already made four such glaciers.

The advantages are clear. Natural glaciers are way up in the mountains, and they melt slowly in summer. Water reaches the villages quite late. Norphel has brought glaciers closer to the villages. Water comes in early as a bonus for the farmers.

In 1996, one year after he had retired, Norphel joined the Leh Nutrition Project, a non-governmental organisation, as project manager for watershed development. “Watershed development is the only solution for Ladakh’s rural economy. Otherwise, you will have rural folk flocking the city in search of jobs. And there are not many to go around,” he indicates.

Norphel proposes artificial glaciers as a substitute for dams, which to him are environmental and social problems, besides being a financial burden.

Having spent so many years in governmental rural development, he has an interesting view of why they fail invariably. “Financial leakage,” he says, using a metaphor of water. Simple, isn’t it?