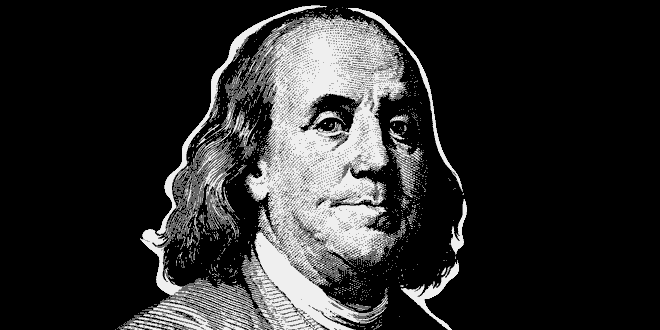 Benjamin Franklin was born on January 17, 1706 in Boston, Massachusetts. He was one of twenty children. Franklin’s father Josiah had ten children by his first marriage and ten by his second. Benjamin was the fifteenth child. He also happened to be the youngest boy. Franklin was only able to attend two years of schooling but continued his own education by reading. At the age of 12, he became apprenticed to his brother James who was a printer. When his brother did not allow him to write for his newspaper, Franklin fled to Philadelphia.

Franklin began apprenticed to his brother who was a printer. Because his brother would not allow him to write for his newspaper, Franklin wrote letters to the paper in the persona of a middle-aged woman named “Silence Dogood”. By 1730, Franklin created “The Pennsylvania Gazette” where he was able to publish articles and essays on his thoughts. From 1732 to 1757, Franklin created a yearly almanac called “Poor Richard’s Almanack”. Franklin adopted the name “Richard Saunders” while he was writing for the almanac. From quotes within the almanac, he created “The Way to Wealth.”

Franklin was a prolific inventor. Many of his creations are still in use today. His inventions included:

Franklin came up with an experiment to prove that electricity and lightning were the same thing. He conducted the experiment by flying a kite in a lightning storm on June 15, 1752. From his experiments he devised the lightning rod. He also came up with important concepts in meteorology and refrigeration.

Franklin was sent to Great Britain by Pennsylvania in 1757. He spent six years trying to get the British to provide Pennsylvania with more self rule. He was well-respected abroad but could not get the king or parliament to budge.

After the beginning of the American Revolution, Franklin went to France in 1776 to gain French aid against Great Britain. His success helped turn the tide of the war. He stayed in France as America’s first diplomat there. He represented America at the treaty negotiations that ended the Revolutionary War which resulted in the Treaty of Paris (1783). Franklin returned to American in 1785.

Even after the age of eighty, Franklin attended the Constitutional Congress and served three years as the president of Pennsylvania. He died on April 17, 1790 at the age of 84.

Benjamin Franklin was extremely important in the history of the move from thirteen individual colonies to one unified nation. His actions as elder statesman and diplomat helped ensure independence. His scientific and literary achievements helped him earn respect at home and abroad. While in England, he also received honorary degrees from St. Andrews and Oxford. His significance cannot be understated.

Franklin began his political career when he was elected to the Pennsylvania Assembly in 1751. In 1754, he presented the significant Albany Plan of Union at the Albany Congress. With his plan, he proposed that the colonies unify under one government to help organize and protect the individual colonies. He worked hard over the years to try and get Great Britain to allow Pennsylvania to have more autonomy and self-rule. As the revolution approached with increasingly strict rules over the colonies, Franklin tried to persuade Britain that these acts would eventually lead to revolt. Seeing the importance of having an effective way to get messages from one town to another and one colony to another, Franklin reorganized the postal system.

Realizing that his beloved Britain would not pull back and provide the colonists with more of a voice, Franklin saw the need to fight back. Franklin was elected to attend the Second Continental Congress that met from 1775 to 1776. He helped draft and signed the Declaration of Independence.