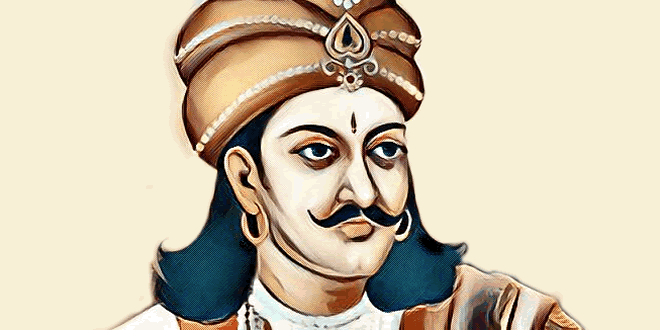 Bappa Rawal was one of the most powerful and famous rulers of the Mewar Dynasty. Although a surviving member of the Guhilot clan, Prince Kalbhoj (his actual name) who came from Atri clan did not continue the family name of seven generations when he came to the throne; instead, he established the Mewar Dynasty, naming it for the kingdom he had just taken. He went on to become a celebrated hero on battlefields near and far, yet his fascinating life is full of enigmas, and many were the legends created about him. It is said that Bappa was blessed by Harit Rishi, a sage of the Mewar region, with kingship. His father, Rawal Mahendra II had married a woman of the Paramara Rajput clan, from Mt. Abu or Chandravati, both Paramara centres at that time. She was also the sister of Maan Mori, the Paramara king who ruled much of the State of Mewar. This included Guhilot clan land, which Paramara invaders from Malwa had annexed a century or so earlier, and set up their capital in the ancient fortress of Chittorgarh.

Bappa Rawal is said to have spent his childhood near a place called Nagda. As with most high-spirited princes, there are several legends from Bappa’s early years as a youth in the wild Vindhya Range. The pranks of this royal shepherd (he tended the sacred cattle of the Brahmans) include his allegedly innocent mischief among village damsels, although perhaps it was not so innocent. One afternoon, in a game of his own devising, he ‘married’ several of the young girls, which ended with his having to flee Nagda to a hide-out in the hills to escape the maidens’ irate parents. An interesting footnote to this legend of potential virility is that Bappa Rawal is said to have married many women, and sired well over one hundred children.

Bappa Rawal played an important role in the Battle of Rajasthan, a series of wars fought in the 8th century AD between the regional rulers of North-Western India and the Arabs of Sindh, in which the regional Indian rulers inflicted a resounding defeat on the invading Arabs. In the 8th century Arab Muslims started attacking India within a few decades of the birth of Islam, which was basically an extension of invasion of Persia. In order to ward off Muslim invasions across the western and northern borders of Rajputana, Bappa united the smaller states of Ajmer and Jaisalmer to stop the attacks. Bappa Rawal fought and defeated the Arabs in the country and turned the tide for a while. Bin Qasim was able to defeat Dahir in Sindh but was stopped by Bappa Rawal. Some accounts say that Qasim attacked Chittor, which was ruled by Mori Rajputs. Bappa, of Guhilot dynasty, was a commander in Mori army and so was Dahir’s son. Bappa defeated and pursued Bin Qasim through Saurashtra and back to the western banks of the Sindhu (i.e. current day Baluchistan). He then marched on to Ghazni and defeated the local ruler Salim and after nominating a representative returned to Chittor. After Raja Mori named Bappa Rawal his successor and crowned him King of Chittor, Bappa Rawal and his armies invaded various kingdoms including Kandahar, Khorasan, Turan, Ispahan, Iran and made them vassals of his kingdom. Thus he not only defended India’s frontiers but for a brief period was able to expand them.