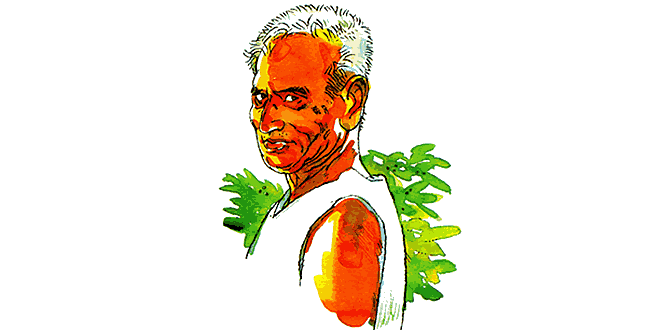 Baba Amte (December 26, 1914 – February 9, 2008), born Murlidhar Devidas Amte was a respected Indian social activist. He was the founder of several ashrams and communities for the service of leprosy patients and other marginalized people that were shunned by society. Anandwan (literally, “Forest of Joy”), located in the remote and economically less privileged district of Chandrapur, Maharashtra, is the most well-known amongst them and was his home. Baba’s thoughts are well conveyed from the words he used describe himself to British journalist Graham Turner I don’t want to be a great leader, I want to be a man who goes around with a little oil can and when he sees a breakdown offers his help. To me, the man who does that is greater than any holy man in saffron-colored robes. The mechanic with the oilcan, that is my ideal in life.

Baba Amte dedicated his life to various other social causes, notably wildlife preservation and his involvement in Narmada Bachao Andolan.

Amte was born in Hinganghat located in Wardha District of Maharashtra state of India in a wealthy family of Brahmin jagirdars. He was called as baba (an affectionate title in Marathi, which can also be interpreted as a title of respect) not because it was conferred upon him but since it was a nickname given to him by his parents. Trained in law, Baba Amte had a lucrative practice at Wardha. It was then that Baba got involved in Indian freedom struggle and started acting as a defence lawyer for leaders imprisoned in the 1942 Quit India movement. Baba was deeply influenced by Mahatma Gandhi, with whom he spent sometime in Sevagram Ashram. Baba was follower of Gandhism for his entire life. He practiced various aspects of Gandhism including weaving and wearing khadi, dedicating his life to the cause of upliftment of the downtrodden classes of society.

Anandwan was the first of the three ashrams started by Baba Amte to treat and rehabilitate leprosy victims from the disadvantaged sections of society. After taking a leprosy orientation course at the Calcutta School of Tropical Medicine, Baba Amte began his fight against leprosy. He used to set up about 11 weekly clinics around Warora, in Chandrapur district. Taking his work to the next level, he started the “Anandwan” (Forest of Joy) ashram in a remote jungle near Warora to help rehabilitate patients. Anandwan was registered in 1951 and received a state land grant of 250 acres. In those days, leprosy was associated with social stigma and patients were disowned by society. It was then believed that leprosy patients were sinners, paying for sins they had committed. There was also a widespread fear that leprosy was contagious and could be spread by touch. Baba Amte strove to dispel these myths and once even allowed bacilli from a leprosy patient to be injected into him while participating in an experimental test.

Baba Amte believed in Gandhism and followed the ideals laid by Gandhi. After his stay at Sevagram, Gandhi’s ashram near Wardha, Baba was fascinated by Gandhi and became his disciple. Gandhi conferred upon Baba Amte the title Abhayasadhak, for this fight against leprosy. Baba Amte was follower of Gandhian philosophy and lead a Spartan life. Baba wore khadi clothes from the looms of Anandwan, eat fruits and vegetables grown in Anandwan. He believed n the concept of self sufficient village industry which can be seen in the way he established Anandwan and his work for empowerment of people. Not only did he follow Gandhian way of life but he also used his principles to fight against government. Baba Amte used the same non-violent means to fight the Indian government during Narmada Bachao Andalon, that Gandhi used against the British Raj.

In 1990, Baba Amte left Anandwan to live along the Narmada river and to join Medha Patkar’s Narmada Bachao Andolan (Save Narmada Movement), which fights against the unjust displacement of local inhabitants and damage to the environment on account of the construction of the Sardar Sarovar dam on the Narmada river. In his words, “I am leaving to live along the Narmada. Narmada will linger on the lips of the nation as a symbol of all struggles against social injustice.” Narmada Bachao Andolan, together with Patkar and Baba Amte as its spokespersons, was the 1991 recipient of the Right Livelihood Award.

Baba Amte had not been keeping well for several years in his later life. He was compelled to lie down on a bed for much of the time due to a severe spondylosis condition. In 2007, he was diagnosed with leukemia.

All monetary proceeds from his awards were used for his social projects.