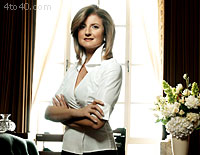 Arianna Huffington, I first met Arianna in 1995 at the White House Correspondents’ Dinner. We had both been invited by the Washington Times, and I insisted on sitting next to the striking Greek-born redhead (though not, strictly speaking, redheaded-born Greek). We hit it off.

Arianna introduced me to her friend Newt Gingrich. I told her the Gingrich revolution was a fraud. Arianna had signed on for the part of the revolution that wanted to unravel the social safety net and replace it with faith-based programs.

She took the mission very seriously but soon discovered that the Gingrich Republicans did not. “Effective compassion” was just a fig leaf for closing down the Department of Education, cutting Medicare and getting rid of the Environmental Protection Agency. A disillusioned Arianna took to bed – with me – in our “Strange Bedfellows” segment on the TV show Politically Incorrect. No doubt because of my (persuasive) prowess and Arianna’s intellectual openness, she switched, becoming a lefty.

With her indefatigable persistence, resourcefulness and good humor, Arianna, 55, has gone from ambitious project to ambitious project with varying degrees of success, finding herself the proprietor of the widely read, hugely influential liberal blog Huffington Post.

None of this would have happened were it not for me. And it seems oddly ironic that it is Arianna, not I, who has been named one of TIME’s 100 most annoying (sorry, influential) people. Arianna should be writing about me.