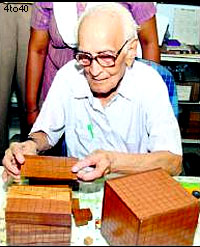 Annaswamy Ranganath Rao — When the Central Board of Secondary Education (CBSE) made it mandatory for schools across India to have a laboratory for mathematics in 2006, many considered it an innovative move. In the 100-mark maths question paper, the practical lab exam now gets 20 marks in CBSE schools.

This has put one man in Ahmedabad on top of the world. He is 100-year-old mathematics professor, Annaswamy Ranganath Rao, who pioneered the concept of maths labs, which CBSE took up 32 years later. He even set up one at Vikram Sarabhai Community Science Centre (VSCSC) in Ahmedabad in 1974. “I taught maths for 33 years; I realised the method of teaching the subject in schools was defective. Maths, like philosophy, is an abstract subject. Unlike physics, chemistry or biology, one does not learn maths in a lab and this makes it difficult,” says Rao.

Born in Jakkasamudram in Salem district of Tamil Nadu and educated in Wilson College in Mumbai, Rao came to Bahauddin College in Junagadh in 1933 where he spent 27 years. In 1974, eight years after retiring as principal of a Bhavnagar college, he made it his mission to popularise maths and make its learning a playful and enjoyable experience.

”For a maths lab, I had to create physical models that explained various theorems and equations. This meant I had to innovate,” says Rao, who has created over 200 models, teaching aids and puzzles that make the otherwise incomprehensible Pythogoras Theorem, Gaussian Curve, quadratic equations, Ramanujan’s number and other aspects of geometry, easy to understand.

Models and puzzles, he feels, make a student think. “It is important that the brain is used as an activity room, not just a store-room,” says Rao. At home, he is constantly seen creating puzzles and problems using a slate and pen. But he is not satisfied getting just one solution, and keeps working till he finds seven or eight solutions to a single problem. He has compiled all these puzzles in a book, ï¿½Brain Sharpeners’.

At 100, he is pursuing his mission with the same zeal. Everyday, he takes an autorickshaw to VSCSC where his students, mostly maths teachers in schools and colleges, eagerly await him. He does not remember how many people have learnt this method of teaching maths but he does keep track of the number of schools and colleges that have introduced the concept of mathematics labs.

”The maths laboratory has been Rao saheb’s most important contribution to mathematics in India. People across India were impressed by this concept; he has ben invited to Chennai and Shillong and NCERT headquarters in Delhi to instruct local mathematicians in setting up such laboratories,” says Arun Vaidya, a retired professor of mathematics in Ahmedabad who still sees himself as a disciple of Rao.

Rao still traverses the length and breadth of the state to deliver lectures on maths at various conferences and workshops. His perseverance has been recognised by the Indian government’s department of science and technology, which has decided to nominate him for UNESCO’s prestigious Kalinga Prize for popularising science. If he bags it, Rao will be in the same league as Bertrand Russell, David Attenborough, Arthur C Clarke and others who have won this prize.