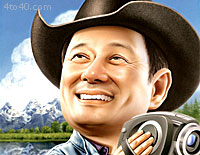 Ang Lee (born October 23, 1954) is a Taiwanese film director. Lee has directed a diverse set of films such as Eat Drink Man Woman (1994), Sense and Sensibility (1995), Crouching Tiger, Hidden Dragon (2000, which won the Academy Award for Best Foreign Language Film), Hulk (2003), and Brokeback Mountain (2005), for which he won an Academy Award for Best Director.

Ang Lee was born in the town of Chaochou in Pingtung, a southern agricultural county in Taiwan. He grew up in a household that put heavy emphasis on education and the Chinese classics. Both of Lee’s parents moved to Taiwan from China following the Chinese Nationalists’ defeat in the Chinese Civil War in 1949. Lee’s father, a native of Jiangxi Province in southern China, imbued his children with studying Chinese culture and art, especially calligraphy.

Lee studied in the National Tainan First Senior High School where his father was the principal. He was expected to pass the annual Joint College/University Entrance Examination, the only route to a university education in Taiwan. But after failing the Exam twice, to the disappointment of his father, he entered a three-year college, National Arts School (now reorganized and expanded as National Taiwan University of Arts) and graduated in 1975. His father had wanted him to become a professor, but he had become interested in drama and the arts at college. This early frustration set his career on the path of performance art. Seeing Ingmar Bergman’s film The Virgin Spring (1960) was a formative experience for him.

After finishing the Republic of China’s mandatory military service, Lee went to the U.S. in 1979 to study at the University of Illinois at Urbana-Champaign, where he completed his bachelor’s degree in theater in 1980. Thereupon, he enrolled at the Tisch School of the Arts of New York University, where he received his MFA. He was a classmate of Spike Lee and worked on the crew of his thesis film, Joe’s Bed-Stuy Barbershop: We Cut Heads. During graduate school, Lee finished a 16mm short film, Shades of the Lake (1982), which won the Best Drama Award in Short Film in Taiwan. His own thesis work, a 43-minute drama, Fine Line (1984), won NYU’s Wasserman Award for Outstanding Direction and was later selected for the Public Broadcasting Service.