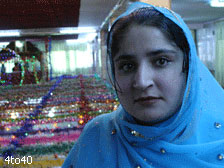 ”We are thrilled to recognize Anarkali for her tireless work in promoting democracy, human rights, and civil society in Afghanistan,” said Radio Free Afghanistan Director Akbar Ayazi. “Anarkali has been taking part in Afghanistan’s reconstruction since she was a teenager – this recognition is well-deserved.”

At age 12, Honaryar graduated from high school – six years earlier than her peers – and became interested in civil rights while studying medicine. Upon learning that she was Radio Free Afghanistan’s ‘Person of the Year,’ Honaryar said she was “honored to win this award by the most popular radio station in Afghanistan.”

”I dedicate this honor to all those young people who fight for human rights, equality, justice, and civil society,” she said. “Everyone in Afghanistan – including women and minorities – deserve the same legal protections and educational opportunities for a better life.”