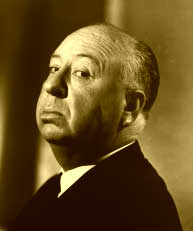 Sir Alfred Joseph Hitchcock, (13 August 1899 – 29 April 1980) was a British film director, producer and cameo appearance actor. He pioneered many techniques in the suspense and psychological thriller genres. After a successful career in British cinema in both silent films and early talkies, Hitchcock moved to Hollywood. In 1956, he became an American citizen while remaining a British subject.

Over a career spanning more than half a century, Hitchcock fashioned for himself a distinctive and recognisable directorial style. He pioneered the use of a camera made to move in a way that mimics a person’s gaze, forcing viewers to engage in a form of voyeurism. He framed shots to maximise anxiety, fear, or empathy, and used innovative film editing. His stories frequently feature fugitives on the run from the law alongside “icy blonde” female characters. Many of Hitchcock’s films have twist endings and thrilling plots featuring depictions of violence, murder, and crime, although many of the mysteries function as decoys or “MacGuffins” meant only to serve thematic elements in the film and the extremely complex psychological examinations of the characters. Hitchcock’s films also borrow many themes from psychoanalysis and feature strong sexual undertones. Through his cameo appearances in his own films, interviews, film trailers, and the television program Alfred Hitchcock Presents, he became a cultural icon.

Hitchcock directed more than fifty feature films in a career spanning six decades. Often regarded as the greatest British filmmaker, he came first in a 2007 poll of film critics in Britain’s Daily Telegraph, which said: “Unquestionably the greatest filmmaker to emerge from these islands, Hitchcock did more than any director to shape modern cinema, which would be utterly different without him. His flair was for narrative, cruelly withholding crucial information (from his characters and from us) and engaging the emotions of the audience like no one else.” The magazine MovieMaker has described him as the most influential filmmaker of all-time, and he is widely regarded as one of cinema’s most significant artists.

Hitchcock was born on 13 August 1899 in Leytonstone, London, England, the second son and youngest of three children of William Hitchcock (1862–1914), a greengrocer and poulterer, and Emma Jane Hitchcock (née Whelan; 1863–1942). He was named after his father’s brother, Alfred. Hitchcock was raised Catholic and was sent to Salesian College (London) and the Jesuit Classic school St Ignatius’ College in Stamford Hill, London. His mother and paternal grandmother were of Irish extraction. He often described his childhood as being very lonely and sheltered, a situation compounded by his obesity.

Hitchcock said he was sent by his father to the local police station with a note asking the officer to lock him away for ten minutes as punishment for behaving badly. This idea of being harshly treated or wrongfully accused is frequently reflected in Hitchcock’s films. Hitchcock’s mother would often make him address her while standing at the foot of her bed, especially if he behaved badly, forcing him to stand there for hours. These experiences would later be used for the portrayal of the character of Norman Bates in his movie Psycho.

Hitchcock’s father died when he was 14. In the same year, Hitchcock left St. Ignatius to study at the London County Council School of Engineering and Navigation in Poplar, London. After graduating, he became a draftsman and advertising designer with a cable company called Henley’s.

It was while working at Henley’s that he first started to dabble creatively. Upon the formation of the company’s in-house publication The Henley Telegraph in 1919, Hitchcock started to submit short articles, eventually becoming one of its most prolific contributors. His first piece was Gas (1919), published in the very first issue, in which a young woman imagines that she is being assaulted one night in Paris – only for the twist to reveal that it was all just a hallucination in the dentist’s chair, induced by the anaesthetic. His second piece was The Woman’s Part (1919), which involves the conflicted emotions a husband feels as he watches his wife, an actress, perform onstage. Sordid (1920) surrounds an attempt to buy a sword from an antiques dealer, with another twist ending. The short story And There Was No Rainbow (1920) was Hitchcock’s first brush with possibly censurable material. A young man goes out looking for a brothel, only to stumble into the house of his best friend’s girl. What’s Who? (1920), while being very funny, was also a precursor to the famous Abbott and Costello “Who’s on First?” routine. The History of Pea Eating (1920) was a satirical disquisition on the various attempts mankind has made over the centuries to eat peas successfully. His final piece, Fedora (1921), was his shortest and most enigmatic contribution. It also gave a strikingly accurate description of his future wife, Alma (whom he had not met yet).

During this period, Hitchcock became intrigued by photography and started working in film production in London, working as a title-card designer for the London branch of what would become Paramount Pictures. In 1920, he received a full-time position at Islington Studios with its American owner, Famous Players-Lasky and their British successor, Gainsborough Pictures, designing the titles for silent movies. His rise from title designer to film director took five years.

Hitchcock was a multiple nominee and winner of a number of prestigious awards, receiving two Golden Globes, eight Laurel Awards and five lifetime achievement awards, as well as being six-time nominated for, albeit never winning, any of the Academy Awards.