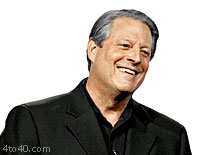 Albert Arnold “Al” Gore, Jr. was on born March 31, 1948. He served as the 45th Vice President of the United States from 1993 to 2001 under President Bill Clinton. He was the Democratic Party nominee for President in the 2000 U.S. presidential election.

Gore is currently an author, businessperson, and environmental activist. He was previously an elected official for 24 years, representing Tennessee in the U.S. House of Representatives (1977–85), and later in the U.S. Senate (1985–93), and finally becoming Vice President in 1993. In the 2000 presidential election, Gore won the popular vote by more than 500,000 votes. However, he ultimately lost the Electoral College, and the election, to Republican George W. Bush when the U.S. Supreme Court settled the legal controversy over the Florida vote recount by ruling 5-4 in favor of Bush. It was the only time in history that the Supreme Court may have determined the outcome of a presidential election.

He is a founder and current chair of the Alliance for Climate Protection, the co-founder and chair of Generation Investment Management, the co-founder and chair of Current TV, a member of the Board of Directors of Apple Inc., and a senior adviser to Google. Gore is also a partner in the venture capital firm, Kleiner Perkins Caufield & Byers, heading that firm’s climate change solutions group. He has served as a visiting professor at Middle Tennessee State University, Columbia University Graduate School of Journalism, Fisk University, and the University of California, Los Angeles.

Gore has received a number of awards including the Nobel Peace Prize (joint award with the Intergovernmental Panel on Climate Change) (2007), a Grammy Award for Best Spoken Word Album (2009) for his book An Inconvenient Truth, a Primetime Emmy Award for Current TV (2007), and a Webby Award (2005). Gore was also the subject of the Academy Award-winning (2007) documentary An Inconvenient Truth in 2006. In 2007 he was named a runner-up for Time’s 2007 Person of the Year.

Albert Gore, Jr. was born in Washington, D.C., the second of two children of Albert Gore, Sr., a U.S. Representative who later served as a U.S. Senator from Tennessee, and Pauline LaFon Gore, one of the first women to graduate from Vanderbilt University Law School. Gore’s paternal ancestors were Scots-Irish who first settled in Virginia in the mid 17th-century and moved to Tennessee after the Revolutionary War. His older sister Nancy LaFon Gore, who was born in 1938, died of lung cancer in 1984.

During the school year he lived with his family in The Fairfax Hotel in the Embassy Row section in Washington D.C. During the summer months, he worked on the family farm in Carthage, Tennessee, where the Gores grew tobacco and hay and raised cattle.

Gore attended the all boys’ St. Albans School in Washington, D.C. from 1956 to 1965, a prestigious feeder school for the Ivy League. He was the captain of the football team, threw discus for the track and field team, and participated in basketball, art, and government. He graduated 25th in his class of 51, applied to only one college, Harvard, and was accepted.

He met Mary Elizabeth “Tipper” Aitcheson from nearby the St. Agnes School at his St. Albans senior prom in 1965. Tipper followed Gore to Boston to attend college, and on May 19, 1970, shortly after Tipper graduated from Boston University, they married at the Washington National Cathedral.

In early June 2010, shortly after purchasing a new home, the Gores announced in an e-mail to friends that after “long and careful consideration”, they had made a mutual decision to separate.

Gore has been involved with environmental issues since 1976, when as a freshman congressman, he held the “first congressional hearings on the climate change, and co-sponsor[ed] hearings on toxic waste and global warming.” He continued to speak on the topic throughout the 1980s and was known as one of the Atari Democrats, later called the “Democrats’ Greens, politicians who see issues like clean air, clean water and global warming as the key to future victories for their party.”

In 1990, Senator Gore presided over a three-day conference with legislators from over 42 countries which sought to create a Global Marshall Plan, “under which industrial nations would help less developed countries grow economically while still protecting the environment.” In the late 1990s, Gore strongly pushed for the passage of the Kyoto Protocol, which called for reduction in greenhouse gas emissions. He was opposed by the Senate, which passed unanimously (95–0) the Byrd–Hagel Resolution (S. Res. 98), which stated the sense of the Senate was that the United States should not be a signatory to any protocol that did not include binding targets and timetables for developing as well as industrialized nations or “would result in serious harm to the economy of the United States”.

In 2004 he co-launched Generation Investment Management, a company for which he serves as Chair. A few years later, Gore also founded The Alliance for Climate Protection, an organization which eventually founded the We Campaign. Gore also became a partner in the venture capital firm, Kleiner Perkins Caufield & Byers, heading that firm’s climate change solutions group. He also helped to organize the Live Earth benefit concerts.