One night I dreamed that everywhere
Were sounds of laughter in the air,
And in a grassy field I saw
What all this merriment was for-
A funny little man stood there
With wisps of straw instead of hair,
And on his head a battered hat
Which tickled Marmalade the cat;
While, chuckling happily, a goat
Was nuzzling in his tattered coat,
Whose pocket had a holw so big
That in it sat a baby pig.
They giggled at his ragged clothes
And pointed carrot for a nose,
And as this laughter filled the place
He had a smile upon his face;
Then gruff old bulldog barked: “Who’s he?”
A donkey brayed: “Well, don’t ask me!”
And Mrs Foal exclaimed: “Of course,
He’s far too small to be a horse.”
“I think that it is very queer
He doesn’t talk,” laughed Mother Deer.
The scarecrow thought that they were rude
To crowd around him and intrude;
He looked at them with such dismay
That everybody went away!
And then at last he gruffly spoke:
And asked me crossly: “What’s the joke?”
“You make them laugh,” I said. “It’s true,
But then they love to be with you.”
He looked so pleased, and gave a smile:
“They’d better come back for a while!”
And just as he became their friend,
My lovely dream came to an end. . .

Share
Previous The Quangle Wangle’s Hat
Next The Turtle Doves 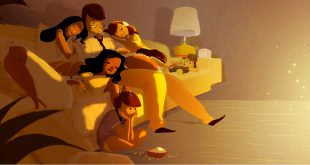