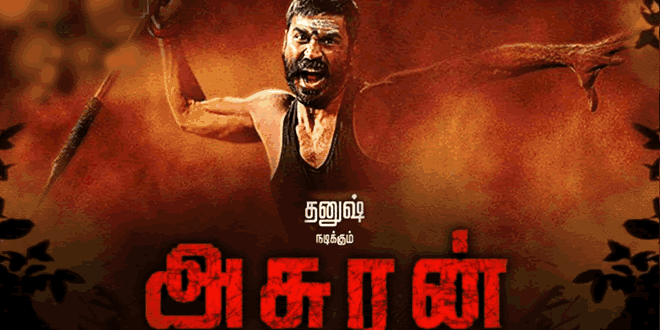 The plot of this movie is inspired by the novel ‘Vekkai’.

Asuran is an upcoming Indian Tamil-language action drama film written and directed by Vetrimaaran. The film stars Dhanush in the dual roles of father and son. The film marks the debut of Manju Warrier in Tamil cinema. It was produced by Kalaipuli S. Thanu under his production banner V Creations. G. V. Prakash Kumar scored the music for the film, rejoining back his association with director Vetrimaaran. The film is based on the novel Vekkai by Poomani.

The film was announced by Vetrimaaran and Dhanush in December 2018 post the success of their Vada Chennai released in the same year. The duo earlier revealed plans on making a sequel to Vada Chennai but agreed to do another film before that.

The first look poster was unveiled by Dhanush through his Twitter page on 21 December 2018. The film marks the fourth collaboration between the actor and director after Polladhavan (2007), Aadukalam (2011) and Vada Chennai (2018). The new look poster of the film was released on 10 January 2019. Principal photography began on 26 January 2019. Manju Warrier was selected as lead actress which marked her acting debut in Tamil. The Polladhavan and Aadukalam combo are back in music G. V. Prakash Kumar.

In their fourth collaboration, Dhanush and Vetrimaaran whip up a riveting, blood-soaked tale of revenge and redemption in Asuran, based on the best-selling novel Vekkai by Poomani. Set against a rural backdrop, spanning two generations and at a time when the social class divide was at its peak, this story of two warring families and the cost they pay for their actions couldn’t have been made more effectively.

No other filmmaker could have handled this story of uprising as realistically as Vetrimaaran, and it rates as one of his best works so far.

Asuran is the story of Siva Saamy (played by Dhanush), a father, who has left his violent past behind, and is now living a quiet life with his three children and wife. He’s content doing farming in his small patch of land and has no major expectations from life apart from getting his eldest son (Teejay as Velmurugan) married. Velmurugan is a hot-headed youngster and when he crosses paths with a powerful upper class family from the neighbouring village, things take an ugly turn and Siva Saamy and his family have to pay the price.

In order to save his family, Siva Saamy is forced to turn violent and walk down the same path he chose to leave many years ago for the sake of his family.

Asuran, which has revenge as its core theme, is a film that also touches upon themes like class divide, caste and power politics. It also talks about how land is a symbol of identity for many people and most don’t even mind sacrificing their lives for the sake of it. The film may not be groundbreaking as, say, Vada Chennai, but it still has moments that make up for some lull in the writing, especially in the second half when a flashback takes away the joy of the riveting first half.

The flashback portion which introduces us to Siva Saamy’s first tryst with violence is the weakest portion of the film which is otherwise elevated by terrific performances.

The film marks the debut of Teejay, Ken Karunas and Manju Warrier. All three of them are unbelievably good in their respective roles but it is Ken who steals the show with a flawless performance. In the first half, Dhanush almost sidelines himself and lets Teejay and Ken take all the spotlight and delivers a subdued performance. The film features Dhanush in dual roles, playing a man in late 40s and as a fearless youngster in his 20s. As the older character, Dhanush is immensely likable and proves his versatility once again in a role nobody else could’ve played so effectively.

Manju Warrier as Dhanush’s wife makes a solid impact and she’s a treat to watch in the emotional scenes.

Asuran is the most violent film to have come out of the collaboration of Dhanush and Vetrimaaran. It’s definitely not a film for the faint-hearted. The film’s haunting score by GV Prakash Kumar and the visuals by Velraj make it even more violent and the experience will hit you like a ton of bricks. Asuran could’ve been a lot better if only Vetrimaaran took care of the second half, especially with the way he handled the flashback portion.