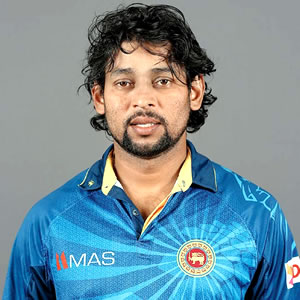 Tillakaratne Dilshan — Tillakaratne Mudiyanselage Dilshan is a Sri Lankan cricketer and member of the Sri Lankan national cricket team since November 1999. Known as Tuwan Mohammad Dilshan prior to his conversion from Islam to Buddhism, an aggressive right-hand batsman, he is also a capable spin bowler and his off breaks are mostly used in the one-day arena. T.M. Dilshan won the award of Twenty20 International Performance of the Year at the ICC awards 2009 for his 96 off 57 balls against West Indies in the semi-final of the 2009 ICC World Twenty20 in England.

With his relentless aggression, strong wrists and natural timing, Tillakaratne Dilshan is one of the most exciting batsmen in the game today. He is technically sound, but, much like Virender Sehwag, he uses the defensive option only as a last resort, after all the attacking alternatives have been explored. He loves to make room and thrash the ball through the off side, but the stroke that bears his signature more than any other is the one he developed for the 2009 ICC World Twenty20 – the scoop shot over his head, which confounded bowlers and experts alike.

In fact, 2009 was a watershed year in his career, and a huge factor was his move up the batting order to open the innings in all three forms of the game. It was a move that proved his making, as he exploited attacking fields and amassed huge scores in all formats: he scored 11 international hundreds in the year, and won the World Twenty20 Player of the Series prize.

Dilshan’s abundant talent was never in doubt from the moment he made his debut, but he went through several early troughs, most notably when he was dropped from 2001 to 2003. Having burst onto the international scene with an unbeaten 163 against Zimbabwe in his first series in November 1999, Dilshan’s career remained largely unfulfilled until he cemented his place as one of the most destructive openers in the modern era. Add his electric fielding, especially at backward point, and his underrated offspin, and Dilshan is a quality package.

Dilshan made his Test debut against Zimbabwe in 1999. He scored his maiden Test hundred in the series with a 163. Dilshan also made his One day international debut against Zimbabwe before spending the next 15 months in and out of the side. Even when he played he never knew his place in the side as he was constantly being pushed up and down the order.

His revival as an international cricketer came in 2003. In four consecutive Test innings he scored 63, 100, 83 and 104. The latter came against the world champion Australian side at Galle.

In the first final of the 2005-06 VB Series, Dilshan’s fielding made headlines when he made four run-outs.

In November 2007, Dilshan scored 188 for Bloomfield Cricket and Athletic Club against Colts Cricket Club in a 50 over game. The innings is the joint 14th highest score made in any List A cricket match (alongside Gary Kirsten’s 188 in 1996), and came from just 135 balls, at a strike rate of 139.25. He hit 14 fours and 12 sixes before being bowled by fellow Sri Lankan international Nuwan Kulasekara.

In the 2009 T20 world cup series, Dilshan became player of the series with 317 runs in seven matches which includes three half centuries. He maintained a 52.83 batting average throughout the series, which was the fourth best among all the cricketers, behind AD Mathews (Sri Lanka) with 75, J Kallis (South Africa) with 59.5 and Younis Khan (Pakistan) with 57.33.

His scoop, played straight over the wicket keeper’s head, was displayed for the first time during this tournament and came to be known as the Dilscoop in his honour.

In the fourth season of Indian Premier League, he was contracted by Royal Challengers Bangalore for US$650,000.