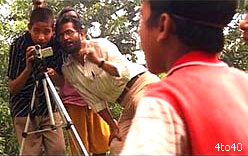 Mama to the children in his destitute home, Swapan is a real hero.

Swapan started Centre for Communication and Development (CCD) in 1994 after he saved 365 Indian children from Saudi Arabia who were used in camel racing. It was then that he realised that he had found his life’s calling.

Swapan’s children home in Madhyamgram was set up in 2001. But unlike any other home, this one goes beyond providing food and shelter. The children are encouraged to dabble in the arts – painting, music, photography and even filmmaking.

And if you are wondering how filmmaking fits into the lives of the underprivileged children, Swapan has a simple answer.

“Film has its international or universal language and you can express yourself very easily and reach everywhere. To take their voice universally and get them accepted, we chose them to make the film,” he says.

It’s a voice that is definitely being heard. Many films have made it to international film festivals and some have won top prizes at festivals like Kids for Kids International Film Festival.

But filmmaking doesn’t come cheap, especially in a place like CCD which is mostly funded by contributions from friends and well-wishers.

So fund crunch is something that Swapan has to deal with regularly. For now, the young film makers are busy and are ready with their new venture.

For them, it’s another shot at a better life.