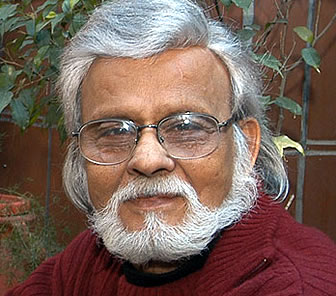 Satish Gujral, (born 25 December 1925) is an Indian painter, sculptor, muralist, graphic designer and architect. He was awarded Padma Vibhushan in 1999.

Painter, Sculptor, Muralist, Architect & Writer Satish Gujral is described as a living legend; one of the few who have consistently dominated the art scene in India for entire post-independent era.

He has won an equal, if not more, acclaim as an architect. His building of the Belgium Embassy in New Delhi has been selected by the international Forum of architects as one of the one thousand best built in the 20th century round the world.

Citizens of New Delhi had honoured Gujral as one of its 25 citizens who in the last 50 years, brought the city on the world map. The Republic of India honoured him with the second highest National Award, “Padma Vibhushan”.

Dozens of documentaries have been made recording his work. A full feature film on his life is in the making. A 24 minute documentary called A Brush with Life is being released on 15 February 2012. The film explores the literary, cultural, political and personal influences on his life and works. It is a celebration of an artist of unparalleled talent and man of immense fortitude.

Four books of his work have been published including an autobiography.

His work shown in this collection reflects the spirit of traditional Indian Miniatures and Temple Sculptures.