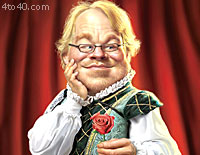 In 2005, Hoffman played the title role in the biographical film Capote (2005), for which he won multiple acting awards including an Academy Award for Best Actor. He received another two Academy Award nominations for his supporting work in Charlie Wilson’s War (2007) and Doubt (2008). Other critically acclaimed films in recent years have included Before the Devil Knows You’re Dead (2007), The Savages (2007) and Synecdoche, New York (2008). In 2010, Hoffman made his feature film directorial debut with Jack Goes Boating‎.

Hoffman is also an accomplished theater actor and director. He joined the LAByrinth Theater Company in 1995, and has directed and performed in numerous Off-Broadway productions. His performances in two Broadway plays led to two Tony Award nominations: one for Best Leading Actor in True West (2000), and another for Best Featured Actor in Long Day’s Journey into Night (2003). Hoffman is set to star as Willy Loman in a revival of Arthur Miller’s play Death of a Salesman beginning on February 13, 2012 at the Ethel Barrymore Theatre.

Hoffman was born in Fairport, New York, the son of Marilyn L. O’Connor, a family court judge, lawyer, and civil rights activist, and Gordon Stowell Hoffman, a former Xerox executive. He has two sisters, Jill and Emily, and a brother, Gordy Hoffman, who scripted the 2002 film Love Liza, in which Philip starred. His father was a Protestant of part German ancestry and his mother was of Irish Catholic background; Hoffman was not raised with a deep commitment to either religion. Hoffman’s parents divorced when he was nine years old.

Hoffman attended the 1984 Theater School at the New York State Summer School of the Arts. After graduating from Fairport High School, Hoffman attended the Circle in the Square Theatre’s summer program, continuing his acting training with the acting teacher Alan Langdon. He received a BFA in drama in 1989 from New York University’s Tisch School of the Arts. At NYU, he was a founding member of the notoriously short-lived and volatile theater company the Bullstoi Ensemble with actor Steven Schub and director Bennett Miller. Soon after graduating, he went to rehab for drug and alcohol addiction and has since remained sober.

Hoffman has had success directing in the theater as well, putting on shows for LAByrinth Theater Company. Of the difference between acting and directing in a play, Hoffman has said that “the director’s experience is not the real experience…You are the most subjective person in the room. You have no objectivity. You have to take a couple of weeks off and then come back to watch it without telling anyone, and you will see it with different eyes.”

Hoffman is in a relationship with costume designer Mimi O’Donnell. They met while working on the 1999 play In Arabia We’d All Be Kings, which Hoffman directed. They have a son, Cooper Alexander, born in March 2003, and two daughters, Tallulah, born in November 2006, and Willa, born in October 2008.