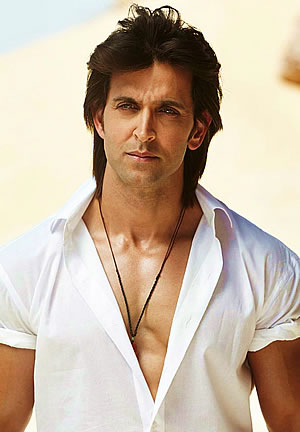 Hrithik Roshan (born 10 January 1974) is an Indian film actor. He has established a successful career in Bollywood, has won six Filmfare Awards, and is cited in the media as one of the most attractive male celebrities in India.

After small appearances as a child actor in several films throughout the 1980s, Roshan made his film debut with a leading role in his father, Rakesh’s romantic thriller Kaho Naa… Pyaar Hai (2000). His performance in the film earned him Filmfare Awards for Best Actor and Best Male Debut. He followed it with leading roles in Fiza and Mission Kashmir (both 2000) and the ensemble blockbuster Kabhi Khushi Kabhie Gham (2001). After several critically and commercially unsuccessful films, he starred in the science fiction film Koi… Mil Gaya (2003) and its sequel Krrish (2006); the former won him the Filmfare Award for Best Actor.[4] Roshan received his third Filmfare Award for Best Actor for his performance in the adventure film Dhoom 2 (2006), and his fourth win was for the historical romance Jodhaa Akbar (2008). He received acclaim for his work as a paraplegic in the drama Guzaarish (2010). His other notable films include the drama Zindagi Na Milegi Dobara (2011), the revenge film Agneepath (2012), and the superhero film Krrish 3 (2013); the latter two rank among the highest-grossing Bollywood films of all time. These accomplishments have established him as a leading actor in Bollywood.

Apart from acting, Roshan is a stage performer and playback singer. He endorses several brands and products, has also featured as the host of the reality Just Dance, and has also launched his own line of clothing.

The hero is not the one who stands tall.

I have always believed that the one who holds the promise to rise up again after every fall is the true hero. When they said that I was finished, I started again. I am sure there are going to be many such moments in my future. I think I will enjoy each and every one of them just as much.

I dare to dream.

Nothing is impossible if you have vision. I am very clear about my goals and firmly believe in the maxim that you will never get anywhere if you don’t know where to go.

All of us have to face our share of struggles. I had to work through a debilitating stammer and a bad case of scoliosis. But I life’s not about holding the best cards, but how well you play them. Today I realize that I am a star not inspite of my shortcomings, but because of them.

Compete only with yourself.

I have learnt to take one step at a time. I am a climber. In my climb there have been some potholes but I have made my path up the hill. Right now, I have competition from some folks around me. But someday, I will be my own competition. I still have to learn to master this thought, and that I will. I am enjoying the stage I am in right now.

And learn to laugh.

That’s the secret ingredient for a happy life – a sense of humour. If you don’t have the ability to laugh at yourself, and realize it is all just a game, then you’ve lost already.