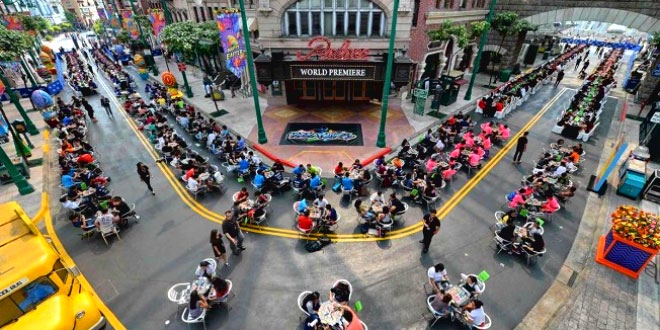 Singapore – March 22, 2016 – Universal Studios Singapore has nabbed the Guinness World Records title for the most people playing a Monopoly game in a single venue; smashing the previous Guinness World Records record of 585 players set in the UK in December, 605 participants congregated at the venue where they sat around tables in groups of four to battle it out in the popular property trading game.

Photo: A total of 605 individuals played Monopoly together in Universal Studios Singapore, breaking the Guinness World Records of having the most people playing a Monopoly game in a single venue.

The Guinness World Records world record for the e most people playing Monopoly (single venue) is 585 and was achieved by Wycombe Abbey (UK) in High Wycombe, UK, on 14 December 2015.

Guinness World Records also recognized the world record for the Most people playing Monopoly (multiple venues), set by 2,918 people at 21 locations world wide and on a website organised by Hasbro, on 27 August 2008.

The event required participants aged eight and over to play for at least 30 minutes without any break.

The record-breaking game was organised to celebrate World Monopoly Day, which was also marked with special events at theme parks in Florida, Greece and Hong Kong.

Since its debut in 1935, Monopoly had been played by more than one billion people in 114 countries.