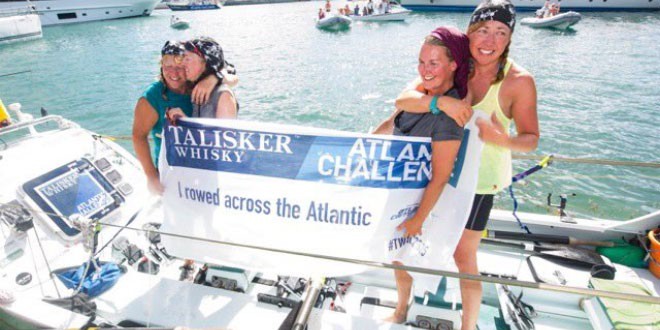 Photo: Four Yorkshire mums who met on the school run have set a new Guinness world record as the oldest all-female crew to row across an ocean. Janette Benaddi, 51, Frances Davies, 47, Niki Doeg, who celebrated her 46th birthday on the water, and Helen Butters, 45, took little more than two months to complete the 3,000-mile Talisker Whisky Atlantic Challenge.

The Guinness World Records world record for the largest rowing class consisted of 191 participants rowing simultaneously and was achieved by Akademischer Sportverband Zürich (Switzerland), in Zurich, Switzerland, on 27 January 2012.

Guinness World Records also recognized the world record for the longest collective distance rowed by any oceanrower; it is 21,275 miles (34,238 km, 18,487 nautical miles), achieved by Peter Bird (UK) during his rows across: the Atlantic East to West, the Pacific East to West and the Pacific West to East between 1974 – 1996.

The women, who all have children at the same school, encountered a hurricane, power failures, attacks from flying fish, seasickness and injuries to complete the endurance challenge, dubbed the world’s toughest rowing race.

They also saucily revealed how they had to row naked after running out of clean clothes during the epic trek.

They were greeted as they set foot on land in the Caribbean harbour by huge crowds including members of their families.

Yorkshire Rows was one of 26 crews taking part in the Talisker Whisky Atlantic Challenge.

Yorkshire Rows are raising money to build a Maggie’s Cancer Caring Centre in Leeds as well as for Yorkshire Air Ambulance.