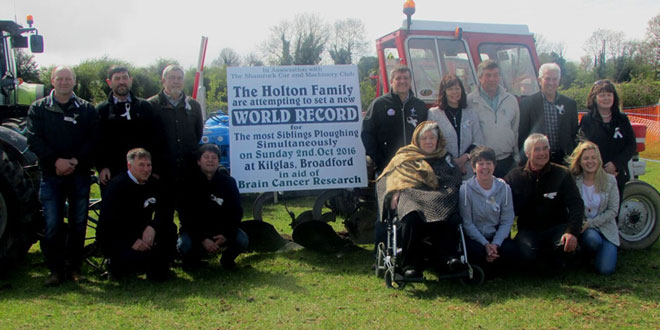 Photo: All 15 of the Holton Siblings 13 brothers and 2 sisters about to set off on their world record attempt.

The Guinness World Records world record for the most tractors ploughing simultaneously was 2,141 at The British Tractor Challenge 2006, organised by John and Lynda Collingborn and held at Hullavington Air Base, Wiltshire, UK, on 25 June 2006.

Guinness World Records also recognized the world record for the most draught horses ploughing simultaneously; it is 84, and was achieved by Mullahead & District Ploughing Society Ltd (UK) in Portadown, Co. Armagh, UK on 28 February 2015.

Frank Holton said “Setting up for the record took a bit of time as we had to organise 15 tractors and ploughs and set them out in the correct position so that everyone could move at the same time.”

David Holton added, “This part of the record was a bit nerve wrecking but once the horn was sounded by Alice and we were away we all really enjoyed it.” Liam Holton continued “Our whole community turned out to cheer us on and this was enormous support to us”.

Frank Holton went on to say,” The idea for the record came from our brother Paddy who passed away in December 2015 from a brain tumour. Paddy had a keen interest in tractors and all farm machinery and was very involved in the local Vintage Car &Machinery Club. Following his diagnosis he started to organise the event and it was his wish to do something memorable with his family and to raise money for Brain Tumour Research and so the seed for the World Record Attempt was planted”.

The Holton family were completely overwhelmed by the astonishing number of people that turned out to support them on the day.

The spirit and generosity of the community, both leading up to the event, and on the day will remain with them for a long time. The funds raised will be handed over to Brain Tumour Ireland, specifically to help further the research being undertaken currently in the Royal College of surgeons and also to The Ross Nugent Foundation which provides essential equipment to cancer units in Irish hospitals.