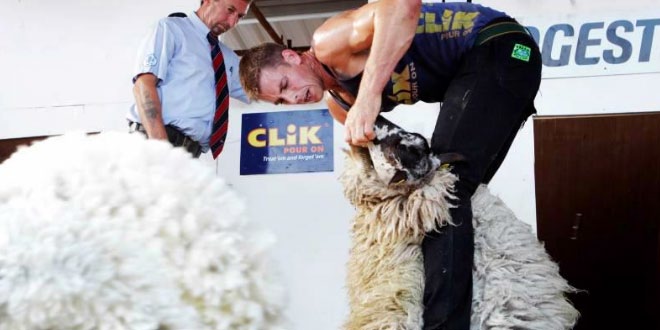 Photo: A new world record has been set by an Irish man who sheared 867 strong wool lambs in nine hours. Ivan Scott, from Kilmacrennan in County Donegal, beat New Zealander Don King’s 2007 record by just one lamb. Mr Scott averaged 96.33 lambs every hour, or one every 37.37 seconds.

Guinness World Records also recognized the world record for the largest collection of sheep-related items; it consists of 1,365 items and belongs to Tyesha Elam (USA) in Houston, Texas, USA, as of 13 November 2015.

Shearing at Trefranck Farm in Cornwall, England, Scott managed to shear 867 lambs in just nine hours broke the Guinness World records world record by just one lamb, taking it from New Zealander Dion King who held the record since 2007.

In so doing, Scott became the first shearer from the northern hemisphere to set the record for the number of lambs shorn. His total of 867 lambs works out at 96.33 lambs an hour, or one ever 37.37 seconds.

Smith broke the previous nine-hour sheep shearing world record of 721 which was set by Rodney Sutton in 2007.