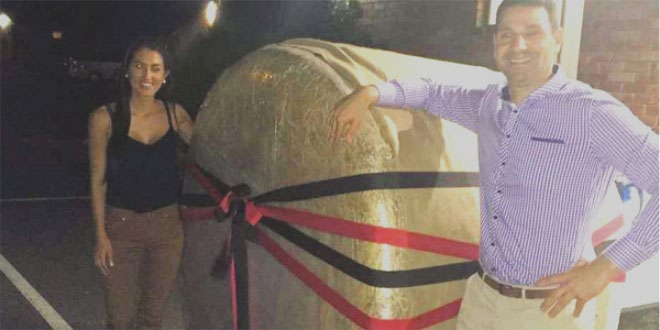 Guinness World Records also recognized the world record for the largest parade of classic tractors; it consisted of 964 tractors, achieved by RFD-TV & Rural TV (both USA) at the Nebraska State Fair in Grand Island, Nebraska, USA, on 25 August 2012.

Andrew Fuda, CEO of WMPG, paid the eye-watering sum at a charity gala to raise money for western Australian farmers affected by a devastating bushfire that tore through Yarloop, Harvey and Waroona in January, The Global Meat reports.

Commenting on the purchase of the hay bale, Fuda said the unique smoke-infused hay will be feed to steers destined for the Japanese market.

“We believe the beef from those animals to be fed the world record priced hay will be highly sought after by very discerning Japanese consumers who may even be able detect the smokey flavours infused from ancient WA [Western Australia] jarrah, red gum and peppermint trees,” said Fuda.