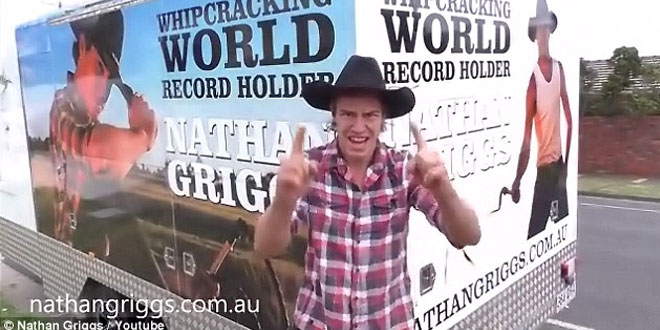 Charters Towers, Australia – February 20, 2017 – Nathan Griggs, who also holds the Guinness record for most whip cracks in one minute, spent more than 3 months perfecting the design of his new whip, which measures 329 feet, 7.5 inches long and sets the new world record for the longest whip cracked.

Photo: After over 500 hours of work and over 160 meters of braiding, Nathan Griggs has made the world’s longest whip.

The Guinness World Records world record for the longest whip cracked is 100.47 m (329 ft 7.5 in) long, and was achieved by Nathan Griggs (Australia) at Defiance Mill Skate Park, in Charters Towers, Queensland, Australia, on 18 August 2016.

Guinness World Records also recognized the world record for the most whip cracks with two whips in one minute is 646 and was achieved by Adam Winrich (USA) at the Texas Renaissance Festival in Plantersville, Texas, USA, on 5 November 2016.

After over 500 hours of work and over 160 meters of braiding, Nathan has made the world’s longest whip.

A surveyor was on hand to measure the length of the whip and two police officers were witness to the feat.

The whip’s cracking had to be audible from 33 feet away from the tip in order to qualify for the record.