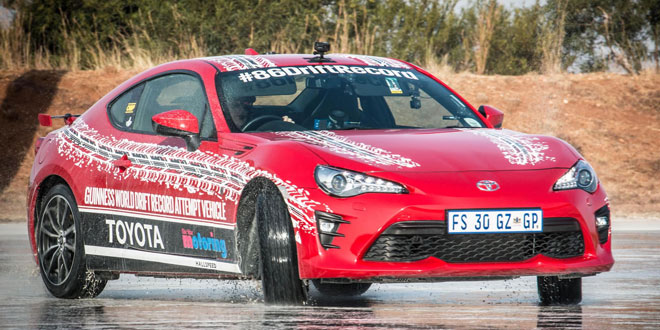 Pretoria, South Africa – June 26, 2017 – Jesse Adams a 39-year-old motoring journalist at the Saturday Star Motoring, beat the Guinness World Record for the longest vehicle drift by skidding into a perpetual circle without stopping 168km in a marathon 5 hours and 46 minutes.

Photo: Jesse Adams, a 39-year-old motoring journalist at the Saturday Star Motoring, beat the Guinness World Record for the longest vehicle drift. Adams managed to slide the GT86 continuously over a distance of 102.5 miles (165.04 kilometers).

In the 10 years he’s been at Star Motoring, he’s driven all over the world, from taking Porsches up and down the Scottish Highlands to racing in the Audi TT Cup in Germany, The Pretoria News reports.

He had to get permission to use the Gerotek military test facility, west of Pretoria, and arrange timekeepers and four independent judges, and medical rescue amid a whole host of other arrangements. Getting the car was the easiest part, he says.

“I’ve had some epic experiences and this one was right up there with the best, but it’s consumed the better part of two years of my life.

Now I just can’t wait to get back to the humdrum routine that most people hate, just coming to work, checking out the new cars and writing about them,” he says.