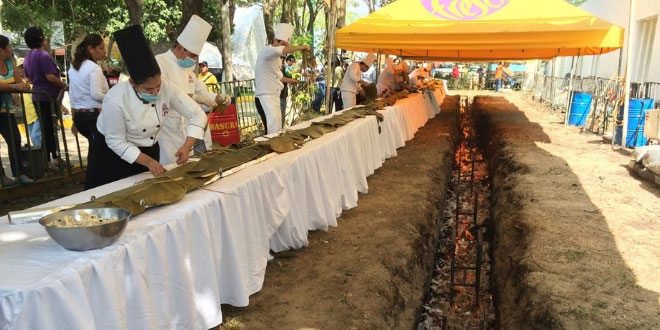 Villahermosa, Mexico – May 13, 2016 – A group of 30 gastronomy students from the Tabasco campus of the University of Guadalajara and the local branch of Canirac, the national chamber of restaurateurs spent seven hours and used 200 kilograms of corn dough, 50 kilos of pork and 500 plantain leaves to cook a tamal which weighed 340 kilograms and was 30.97 meters long – setting the new world record for the Longest tamale.

The Guinness World Records world record for the largest taco rice weighed 746 kg (1,644 lb 10 oz) and was made by Kincho Shokokai (Japan) at Nature Miraikan Koryu Hiroba in Kin-cho, Okinawa, Japan, on 14 November 2010.

Guinness World Records also recognized the world record for the longest line of tacos; it consists of 2,013 tacos and was assembled by Next:Gen Ministries (USA) in Eagle, Idaho, USA, on 11 September 2013.

The preparation of the 400,000-peso (US $22,000) Tabasco tamal specialty took seven hours and required 200 kilograms of corn dough, 50 kilos of pork and 500 plantain leaves, along with the chipilín leaves — Crotalaria longirostrata, a local legume — that give the dish its name.

A special metallic structure was built and placed over a bed of smoldering embers. The uncooked tamal was then laid atop the structure, covered with metallic and cardboard sheets and cooked for three hours.

The resulting delicacy weighed over 340 kilograms, was 30.97 meters long and 19 centimeters wide.