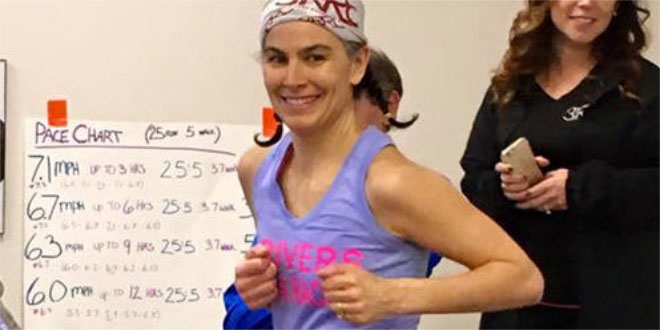 Photo: Suzi Swinehart broke the Guinness World Record for the longest run on a treadmill in 12 hours. She ran 73.3 miles in 12 hours, beating the old record of 68.54 miles.

The Guinness World Records world record for the greatest distance travelled on a treadmill in 24 hours by a woman is 247.2 km (153.6 miles) by Edit Berces (Hungary) at the Eurocentre shopping mall, Budapest, Hungary on 8-9 March 2004.

Guinness World Records also recognized the world record for the greatest distance run on a treadmill in 12 hours (female); it is 98.66 km (61.3 miles) and was achieved by Sharon Gayter (UK) at Teeside University, Middlesbrough, UK, on 31 March 2015.

Swinehart’s run, which took place from 8:00 a.m. to 8:00 p.m. at Three Rivers Running Company in her hometown of Fort Wayne, Indiana, was streamed live online, and she had as many as 50 people in the store at a time cheering her on, the Runner’s World reports.

Summit City Bicycles & Fitness, a local treadmill retailer, had one of its LifeFitness treadmills transported to a laboratory for calibration, and then to the running store for the attempt.

Though Swinehart’s average pace works out to 9:49 per mile, she spent much of the 12 hours running between 8:49 and 9:05 pace. Her overall average was slowed by eight or nine bathroom breaks, changing her shoes and shorts once, and her walk breaks to take in fuel.