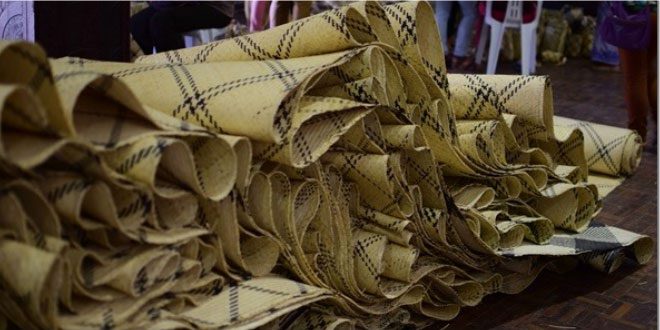 Belaga, Malaysia – May 29, 2016 – Over 400 Orang Ulu weavers from Bakun, Murum and Baram communities have earned themselves the title of the World Record for the longest woven mat (longest rug) in the world; measuring 1128.272m long and 28 inches wide, they were able to smash the previous Guinness World records world record held by Sweden for having the longest rug measuring at 797.51m.

Photo: Measuring 1128.272m long and 28 inches wide, The World’s Longest Mat smash the previous Guinness world record held by Sweden for having the longest rug measuring at 797.51m in 2010.

The Guinness World Records world record for the largest beer mat was created by Carlsberg, and measured 15 m (49.21 ft) in diameter with a thickness of 6 cm (2.36 in) in Fredericia, Denmark on 15 September 2002.

Guinness World Records also recognized the world record for the longest goza mat; it measures 537.27 m (1,762 ft 8 in) and was manufactured by Yashiro Green Project (Japan). It was displayed and measured at Honmachi-shotengai Arcade in Yatsushiro, Kumamoto, Japan, on 12 March 2011. A goza mat is a Japanese style floor mat made form woven rushes.

Organised by Belaga’s women NGO, Peng Doh Belaga and sponsored by Sarawak Energy, the world record attempt united weavers from three communities to weave the rattan floor mat as a symbol of a shared heritage to be preserved for the younger generation of Orang Ulu.

The attempt also showcased the weavers’ craftsmanship and artistic talent on a global platform.

Hailing from over 30 different longhouses, the 400 weavers were from five sub-ethnic groups of the Orang Ulu namely Kayan, Kenyah, Buket, Penan and Lahanan.

The initiative also saw the other villagers assisting in terms of harvesting, stripping and transporting the rattan.