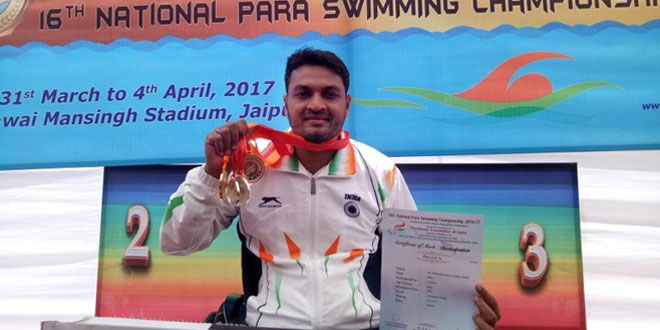 Longest Open-Sea Swim by a Paraplegic

Mumbai, India – April 20, 2017 – Mohammad Shams Aalam Shaikh (b July 17, 1986) of Mumbai, a paraplegic with 100% disability due to spinal cord injury, set a record for having completed the longest open-sea swimming by a paraplegic by covering an impressive 8km in the open seas of Goa in a span of four hours and four minutes.

Photo: Mohammad Shams Aalam Shaikh recently set a record for having completed the longest open-sea swimming by a paraplegic by covering an impressive 8km in a span of four hours and four minutes. He swam in the open seas of Goa.

The Guinness World Records world record for the longest paddleboard journey was 555.2 km (345 miles) and was completed by Wyatt Werneth (USA) paddling North up the coast of Florida from 19 – 27 May 2007.

Guinness World Records also recognized the world record for the longest paddleboard journey (team) is 4,830 km (3,2001 mi) (2,607 nautical miles), from the Island of Cap Breton (Canada) to Capebreton (France) and was achieved by Stephanie Geyer-Barneix, Alexandra Lux and Flora Manciet (France) in Capbreton, France, on 28 August 2009. The journey took 54 days in total.

A trained karate instructor, he would have never guessed a tumour in his spine would one day render his lower body completely paralysed.

It was in 2012 when he was assessed with 100% disability. This not only meant that he could not walk, but he would also have no control over bodily functions like passing urine.

That’s when he took up swimming. Because of the sport, he was able to control his functions and can now pass urine without the use of a catheter. Today, he has 72% disability, The Better India reports.