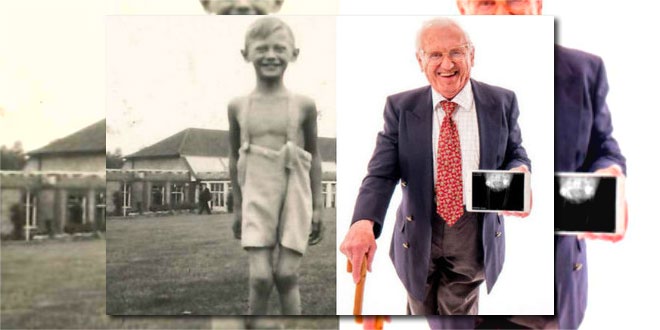 London, UK – March 23, 2016 – Mr. Norman Sharp was just 23 when, in November 1948, had both new hips implanted in what was then a ground-breaking operation at the Royal National Orthopaedic Hospital (RNOH) in Stanmore, near London; those hips have survived to this day, making him a record holder for having the longest lasting artificial hips.

Photo: Norman Sharp, 91, was 23 when he had the first hip replacement operation of its kind ever done on the NHS in 1948. The pensioner from Trowbridge in Wiltshire has been listed as a record-breaker for having the longest lasting artificial hips, with experts amazed at how they have survived so long.

The Guinness World Records world record for the oldest person to have a total hip replacement was John Randall (UK, b. 16 July 1909) who had a revision left total hip replacement at the age of 102 years, 3 months and 30 days. The operation was performed by Mr Ajit Shetty, Mr Ashad Lateef and Dr Patrick O’Connor at Pinderfields Hospital in Wakefield, UK on 15 November 2011.

Mr Sharp was just 23 when, in November 1948, had both new hips implanted in what was then a ground-breaking operation at the Royal National Orthopaedic Hospital (RNOH) in Stanmore, near London, The Western Daily Press reports.

Remarkably, they have remained in place ever since, requiring no revisions. “According to experts in orthopaedic medicine, this is very unusual and a recognised world record,” said a spokesman for the RNOH.

“The hips, which are made of a special alloy called Vitallium, developed in the USA in 1932, were implanted by consultant orthopaedic surgeon Philip Newman in what many think was the first procedure of its kind by the then newly formed NHS.

Now one of the oldest hipsters in town, Mr Sharp said he was chosen for the pioneering operation back in 1948 because he was a young man who was suffering from rare problems with his joints. He said he has made good use of them over the last 67 years.