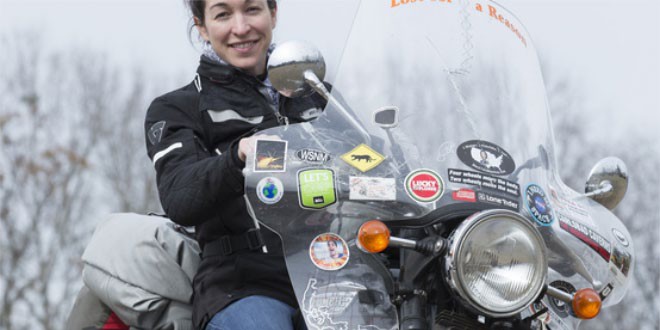 New York, USA – April 4, 2016 – Danell Lynn covered 48,600 miles while riding throughout the contiguous 48 states of the Unite States of America, thus setting the new world record for the Longest journey by motorcycle in a single country.

The Guinness World Records world record for the longest journey by motorcycle in a single country is 78,214.118 km (48,600 miles) and was achieved by Danell Lynn (USA), who rode throughout the United States of America from 19 September 2014 to 29 August 2015.

Guinness World Records also recognized the world record for the largest parade of classic motorcycles; it consisted of 170 motorcycles in a parade organized by the Heimatverein Eibach in Eibach, Germany, on 27 July 2008.

Although her travels actually covered all 50 states, as well as three Canadian provinces, totaling more than 53,000 miles from September 2014 through September 2015, Guinness World Records only counted the miles logged within the continental 48 states. Duplicate miles also did not apply to the record; each of the 48,600 miles covered different routes.

Lynn is the first solo woman motorcyclist to hold the world record.