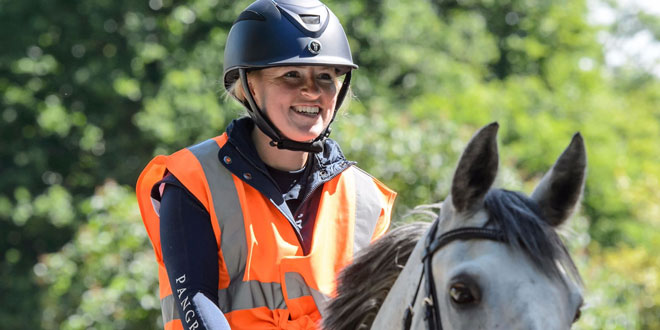 London, UK – June 15, 2017 – Stacey Donnison, Head of Equestrian at Pangbourne College, has set a new world record for the longest horse ride; she started the grueling 40-hour challenge on June 1 and finished the mammoth ride on June 3.

Photo: Miss Stacey Donnison relives her world record-breaking moment. Miss Donnison’s time of 40 hours is a new record by a clear four hours. It involved 12 different horses and a small army of kind volunteers of former College pupils and parents of former and current students.

Guinness World Records also recognized the world record for the longest line of horses; it involved 105 horses linked by harnesses in single file and was achieved by Jose Antonio Martínez (Spain) and Amics del Cavall de Benicarló on 18 January 2004 in Benicarló, Valence, Spain.

So far the head of riding has raised £1,050 for her chosen charities, Pangbourne College’s centenary and Riding for the Disabled in Chobham and Newbury.

The demanding ride saw 12 horses and a small army of volunteers help Miss Donnison with the task.

Each horse was ridden for a maximum of three hours and had a minimum of eight hours rest between shifts. The teacher had 3 minutes to complete each horse change and was flanked by two support vehicles to ensure the safety of her and her mount.

Miss Donnison said of her feat: “The achievement still feels slightly surreal. When I arrived back at the College on Saturday morning my emotions were a mixture of ecstasy and exhaustion. The reality of staying awake for 40 hours and spending all that time in the saddle is going to take some time still to sink in I think.”

Miss Donnison added: “There were so many moments during the ride which made it special – like someone rushing out of their home to feed the horse an apple and very kindly make a donation. All those memories are still buzzing around my head.

“The horses’ welfare was absolutely paramount in my mind. I rode each horse for a maximum of three hours and there were at least eight hours, at the very minimum, before I rode that horse again.

“I had a huge support team helping me out along the route, so horses were immediately taken home at the end of their three hours and then very carefully monitored to make sure there were no problems with them or concerns.”