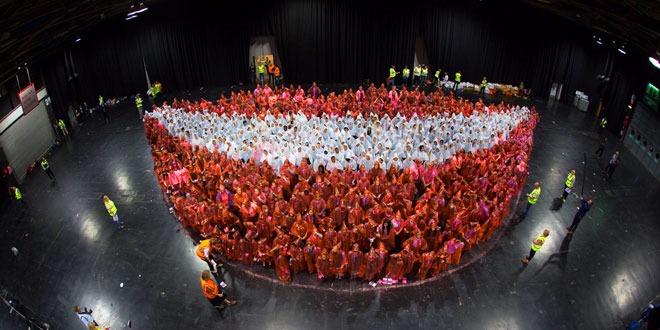 Glasgow, UK – June 12, 2017 – Over 1000 people participated in the Big Smile Big Band event, which took place at the SEC Glasgow, including Dental School and other University staff, dental alumni, school children and teachers from the Glasgow area, setting the new world record for the Largest human smile.

The Guinness World Records world record for the largest human smiley was achieved by 8,018 people during an event organized by Alliance In Motion Global Inc. (Philippines) at Burnham Green, Quirino Grandstand, Luneta Park, Manila, Philippines on 30 May 2015.

Guinness World Records also recognized the world record for the largest human number; it consisted of 7,511 participants and was achieved by the Government of Orel Region and the Youth Organisation Volunteers of Victory (both Russia), in Orel, Russia, on 7 May 2016.

Participants wore red and white ponchos and formed the lips and teeth of a giant smile to highlight the importance of oral health.

Professor Jeremy Bagg, Head of the Dental School at the University of Glasgow, said: “The event has been a huge amount of fun to organise. The promotion of oral health, particularly in children, is an important message to get across. We hope that our record breaking event has been both fun and educational for all involved.”

Dr Margie Taylor, the Chief Dental Officer for Scotland, said: “”I am delighted to be involved in this event which highlights the importance of oral health in such a fun way.”

Dr Colwyn Jones, Consultant in Dental Public Health/Head of the Evidence for Action Team at NHS Health Scotland said: “Congratulations to Professor Bagg and his team in organising this record breaking event. Oral health in Scotland has improved, but not at the same rate for everyone. As with most human diseases, children living in the poorest areas are more likely to have tooth decay.

“Events like the one organised today allow us to remind people that tooth decay is almost entirely preventable. NHS Health Scotland supports the roll out and implementation of Childsmile. Childsmile is a national prevention programme which has improved the oral health of children in Scotland and reduced health inequalities both in dental health and access to dental services.”

“Thanks are due to the event’s main financial sponsor, the British Endodontic Society, and supporters, Cordent, the Dental Defence Union and the Royal College of Physicians & Surgeons of Glasgow.”