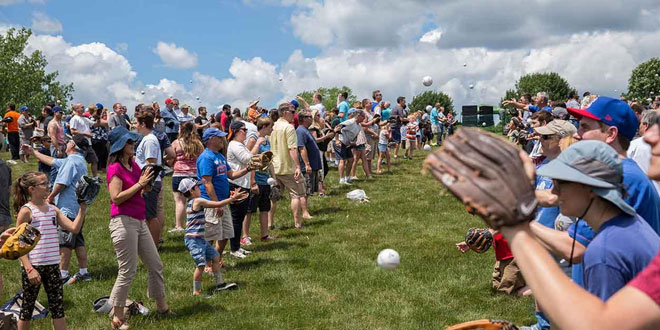 South Barrington, Illinois, USA – June 23, 2017 – In South Barrington, a Chicago suburb, 972 pairs of people played catch on a pleasant day at the Willow Creek Community Church as part of the “DadFest” annual festival, setting the new world record for the Largest game of catch.

The Guinness World Records world record for the largest game of balloon tag consisted of 280 participants and was achieved by ISS (UK & Ireland) in London, UK, on 28 January 2016.

Guinness World Records also recognized the world record for the largest game of leapfrog; it involved 1,348 participants in an event organized at the Canterbury A&P Show (New Zealand) in Christchurch, New Zealand, on November 11, 2010.

The participants broke the previous Guinness world record of 1,058 people, or 529 pairs — all of whom were Major League Baseball fans — who played catch on July 9, 2015, in Cincinnati.

The idea of fatherhood and playing catch is as iconic in America’s cultural heritage as a dad enjoying a burger with a beer in the patio, or as notorious as a dad receiving ties as gifts on Father’s Day.

For the attempt to be successful, participants had to register and play catch for five continuous minutes in select areas outside of the church. The pairs had to stand nine feet apart and could not deviate from their positions to avoid disqualification.