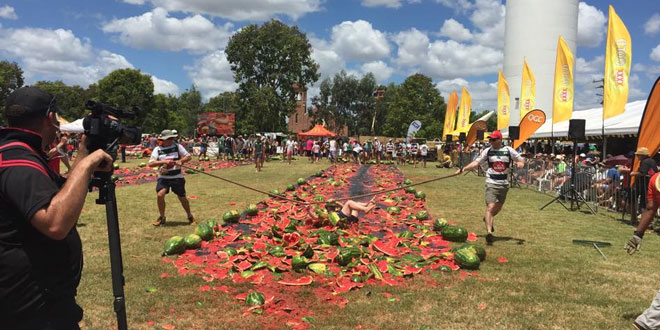 Chinchilla, Australia – February 12, 2017 – Chinchilla is renowned as the ‘Melon Capital’ of Australia, hosting the ‘Melonfest’ once every two years; the fruitful event is situated less than 300km from Brisbane and has events for all ages- ranging from Melon Markets to the Melon Big Bash Cricket, and sets the world record for the Biggest Melon Festival.

Photo: Chinchilla is renowned as the ‘Melon Capital’ of Australia, hosting the ‘Melonfest’ once every two years.

Guinness World Records also recognized the world record for the most melons chopped on the stomach on a bed of nails in one minute; it is 24, achieved by Ashrita Furman and Bipin Larkin (both USA), in New York, New York, USA, on 6 September 2016.

As Chinchilla produces 25% of Australia’s melons (including watermelon, rockmelon and honeydew), the first Chinchilla Melon Festival was held in 1994 by local producers and businessmen, to lift the town’s spirits after the severe drought experienced in the early 1990s.

A special event held in 2009 saw John Allwood secure the Guinness World Record of Melon Head Smashing – cracking open as many watermelons as possible using only the head.

The Melon Festival runs from 16th to 19th February this year.