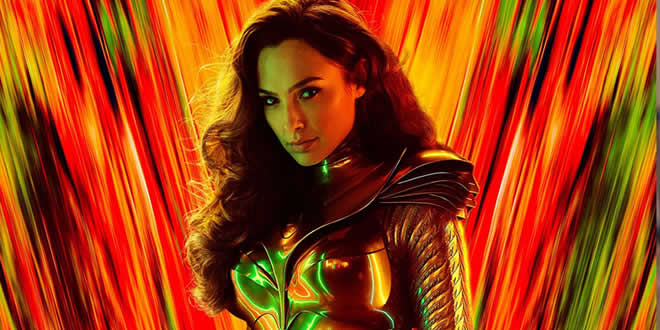 In 1984, Diana Prince comes into conflict with two formidable foes: Maxwell Lord and the Cheetah, while reuniting with her past love Steve Trevor.

Wonder Woman 1984 (also marketed as WW84: Wonder Woman) is an upcoming American superhero film based on the DC Comics character Wonder Woman. It is the sequel to 2017’s Wonder Woman and the ninth installment in the DC Extended Universe (DCEU). The film is directed by Patty Jenkins from a script she wrote with Geoff Johns and David Callaham, and a story by Johns and Jenkins, and stars Gal Gadot as Diana Prince / Wonder Woman, alongside Chris Pine, Kristen Wiig, Pedro Pascal, Robin Wright, and Connie Nielsen in supporting roles. Set in 1984, the film follows Diana as she faces off against Maxwell Lord and Cheetah.

Discussion of a sequel began shortly after the release of the first film in June 2017, and the decision to proceed was confirmed the following month. Principal photography began on June 13, 2019—with filming taking place at Warner Bros. Studios, Leavesden in England, as well as the District of Columbia and Northern Virginia in the United States, London and Duxford in England, Tenerife and Fuerteventura in the Canary Islands, and Almería in Andalusia, Spain—and wrapped on December 22, 2018, after a six-month shoot. Additional filming took place in July 2019.

Wonder Woman 1984 is scheduled to be released in the United States by Warner Bros. Pictures in RealD 3D, Dolby Cinema, IMAX and IMAX 3D on August 14, 2020.

Be careful of what you wish for…. How often have you heard that?  Wonder Woman 1984 takes this axiom and places it in the heart of a superwoman flick. A sequel to Wonder Woman, which broke new ground by presenting us a superwoman film, clearly the sequel will not have the same freshness or novelty. But with gorgeous Gal Gadot headlining it, a wishing stone with miraculous powers to make wishes come true; you can only expect magic to happen. The question is do we feel the magic? The answer is every now and then.

Well, Gal Gadot as Diana makes your jaws drop with her drop dead statuesque looks. She is living in 1984, working in the Smithsonian Institute in Washington, D.C. as anthropologist where she makes friends with Dr Barbara Minerva (Kristen Wiig) who specialises in identifying antiques. They stumble upon this wishing stone with inscriptions in Latin which they dismiss as rather ordinary. Till magically wishes begin to come true. Barbara aspires to be Diana. Diana wants her dead boyfriend Steve Trevor, an American pilot and spy from World War I (Chris Pine), back.  But before they can say hurrah to their new perfect life, the stone is stolen by the villain of the piece Max Lord (Pedro Pascal), an aspiring businessman.

Clearly with the stone in the hands of an overweening man whose greed knows no limits, havoc is close by. Time for our superwoman to turn a saviour and rest of the film is devoted to how she, assisted by her boyfriend Steve, gets to her mission and save the world.

In between you get a dash of romance, some emotions too. A moment or two makes you chuckle as they encounter a locked gate and Steve simply looks at Diana to do the honors, ahem break the lock. You see, the boyfriend can fly planes alright but when it comes to real power, dare you forget who has it. But more than a feminist statement, the message here is on wants and needs. Early on we are told truth as exists is wonderful and can’t be built on lies. No doubt the messaging is pertinent, but it’s kind of overdone. Patty Jenkins does lay it a bit thick.

All superhero films come laced with a message or two but here it threatens to become the driving force. Action is the driver too. However, except for the opening sequence taking us back to Diana’s childhood and the one where her grown up avatar takes on an army of convoys, it’s not quite as superlative.

Surely, there are pluses as you enjoy the transformation of Barbara. From a gawky woman, who doesn’t know how to walk in her heels, to a confident fashionista, it is quite an impressive curve out there. Only her predator act and the fight between her and Diana is oh so formulaic, reducing Barbara’s character to cliché. The male antagonist Max Lord’s scheming ways have more heft. As he moves from Egypt to White House tapping on to the psyche of greedy men like him, there is a momentum and his character resonates. So does, ‘renounce your wish’ which becomes the mantra of the film and its heroine.

Should you renounce the film which we dare say is already on your wish-list? Well, well, if you are a Gadot fan most certainly you can embrace her second solo outing as a superwoman. She dazzles once more as much in her armour and warrior avatar as the human with a heart. However, if you are looking for the dazzling display of sci-fi and superhero movies, look elsewhere. The escapism here is not as wondrous.

Just in case you are wondering why Jenkins chose the period of 1984, it could well be a nod to George Orwell’s dystopian novel. But then as Jenkins has gone on record to say, “It was the height of Western civilization and the success of the world that we all live in, in the aftermath of now.”Any wonder the message has a contemporary ring to it.