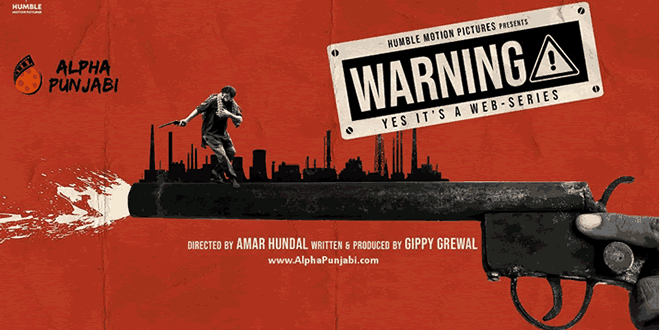 Set in India, Action Movie Warning is about the story of multiple people that are gangsters and wanting revenge, written and produced by Gippy Grewal, by Humble Motion Pictures, Starring: Gippy Grewal, Prince Kanwaljit, and Dheeraj Kumar.

Warning is an upcoming Punjabi language action movie directed by Amar Hundal. Starring Prince Kanwal Jit Singh and Dheeraj Kumar as a lead characters. The movie is written by Gippy Grewal. The movie is produced by Gippy Grewal under the banner of Humble Motion Pictures. The Warning movie is scheduled to be released on 19 November 2021.

If you are wondering why an actor like Gippy Grewal’s name is at the end of the star cast, especially when he is the writer of this action-revenge-drama, well, let us spill the beans! The actor has made this film as a prelude to a bigger story which will come in the form of a sequel.

Gippy shines as writer as well as in a special appearance in the climax, but Prince Kanwal Jit, Pamma in this film, has come out a hero in the story full of villains.

From rape scenes that can be unsettling for some, to Shinda’s revenge act, there are layers to every character. There are applause-worthy dialogues too. Comedy being Punjabi actors’ forte, it is not missing from this revenge saga. In fact, as the story progresses there is no telling whether the next scene will be a fight or a laugh riot or both. We are also caught by surprise at times as dream sequences add twists to the plot . Gippy Grewal as Geja is convincingly mysterious and ferocious. There is, however, an absence of strong female characters and talented actor Seema Kaushal is reduced to a worrying mother.

With heads flying and blood oozing, the film reminds us of Mirzapur and Gangs of Wasseypur, but what makes it different are the characters and their regional identities. Prince KJ reminds us of Nawazuddin Siddiqui at times. Dheeraj Kumar as Shinda passes off as a goon with one- track mind for revenge. The narrator of the film, Kapil Kalyan, has a good job of threading the story which was once a web series. As powerful are the lead characters, including Prince, Dheeraj, Gippy, Mahabir, attention to supporting cast would have added weight to the powerful script. While there’s a lot more to be seen as Gippy promises a grand comeback in its sequel, this film needs no warning for the audience. Go and watch!