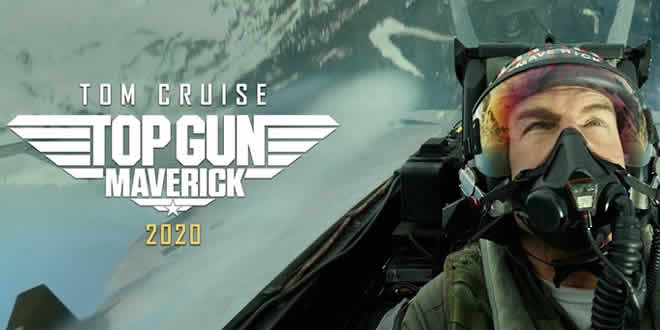 The film is scheduled to be released on 27 May, 2022 by Paramount Pictures.

Top Gun: Maverick takes place 34 years after the events of the original film. Captain Pete “Maverick” Mitchell is relieved of duty as an active pilot and is sent to Top Gun as a combat flight instructor. When he arrives, he must confront his past when Rooster, Goose’s son, seeks to become an aviator as his father was.

Development of the film began in 2010 when Paramount Pictures made offers to Jerry Bruckheimer and Tony Scott to make a sequel to Top Gun. Christopher McQuarrie had also received an offer to write the sequel’s screenplay, which was rumored to have Cruise’s character Maverick in a smaller role. Ultimately, Peter Craig, Justin Marks, who described the film as a dream project, Ashley Edward Miller and Zack Stentz would be credited as screenwriters on the project.

When asked about his idea for a new Top Gun film, Scott replied, “This world fascinated me, because it’s so different from what it was originally. But I don’t want to do a remake. I don’t want to do a reinvention. I want to do a new movie.” The film will reportedly focus on the end of the dog fighting era and the role of drones in modern aerial warfare and that Cruise’s character, Maverick, will fly an F/A-18 Super Hornet. After Scott’s suicide, the sequel’s future remained in question. However, producer Jerry Bruckheimer remained committed to the project, especially given Cruise’s and Kilmer’s interest.

In June 2017, Cruise revealed that the title would be Top Gun: Maverick, with Harold Faltermeyer returning as composer for the sequel. Cruise further stated that, “Aviators are back, the need for speed. We’re going to have big, fast machines. It’s going to be a competition film, like the first one … but a progression for Maverick.” Later the same month, it was confirmed that the film would be directed by Joseph Kosinski, while no title was officially confirmed.

Musician Kenny Loggins has confirmed that his iconic song “Danger Zone” will be featured in the film. In October 2018, it was reported that Hans Zimmer would also compose for the film alongside Harold Faltermeyer.

On June 19, 2019, at CineEurope in Barcelona, attendees were able to watch for the first time some early footage of the film from a special Paramount presentation. During the presentation the President of International Theatrical Distribution Mark Viane and Co-President of Worldwide Marketing and Distribution Mary Daily appeared in flight clothes.

Val Kilmer had campaigned on his social media page that he would like to reprise his role in the film, and by June 2018, The Wrap reported that he will appear in the film. In July 2018, Miles Teller was cast in the role of Goose’s son, against Nicholas Hoult and Glen Powell. All three were flown to the home of Tom Cruise, the star of the film, for chemistry tests. Later that month, Jennifer Connelly joined the film’s cast to play a single mother running a bar near the Naval base.

The female lead of the original film, Kelly McGillis has not reprised her role in the sequel despite the return of both male leads Tom Cruise and Val Kilmer of similar ages.

Preliminary production on the film officially started on May 30, 2018, in San Diego, California. During late August a 15-person film crew from Paramount and Bruckheimer Films were aboard the Norfolk-based aircraft carrier USS Abraham Lincoln to shoot flight deck operations. In mid-February 2019, Cruise and the production crew were sighted on board USS Theodore Roosevelt at NAS North Island. In March, filming was completed at NAS Whidbey Island in Oak Harbor, Washington.

Shortly after the movie trailer’s release, Canadian journalist Mark MacKinnon spotted that Mitchell’s leather flight jacket had been changed from the original movie to omit the Taiwanese and Japanese national flags present on the original which led to widespread speculation that the change was politically motivated in order to appease the Communist Party of China. The move drew criticism from U.S. officials, including Lindsey Graham and Donald Trump Jr.

The film’s first trailer was shown at the 2019 San Diego Comic Con on July 18, 2019. The first trailer received high praise from fans, with many lauding Cruise’s return to the series and some comparing to Star Wars: The Rise of Skywalker.

Never say never! So, thank god for director Joseph Kosinski, who convinced Tom Cruise for the Top Gun’s sequel for it has ripped off the bandage. The pain would be real if we don’t get to see more of that air combat, and aerobatics in movies to come.

It took years to flesh out the right script for Tom Cruise to say yes to the sequel and now we know why. The film is rooted in emotion. Watch the previous one to interpret the silence and ‘that look’ of Tom as he embodies ‘Maverick’ at the age of 59.

Joseph has understood what it is like to see a capable officer age and transfer the responsibilities onto someone else’s shoulders. The piece of advice from old Val Kilmer as Iceman to Maverick— It’s time to let go— hits harder than it should. Just when you believe that he would let go, come the twists and turns one after the other taking you on a roller-coaster ride. For spoiler alert, it doesn’t end when you think it does.

As for the other characters, Miles Teller as Goose’s son Rooster adds to the nostalgia quotient. And 36 years after, the Goose and Maverick song, Great Balls of Fire, has still got it. It won’t be wrong to say, the film shook our brain and rattled our nerves, ‘Goodness gracious, great balls of fire’.

And when it comes to the younger Top Guns, who are apparently trained by the best, Maverick, the tension between Rooster and Hangman, played by Glen Powell, is another call-back from the original. Only Glen is a mix of cold and cocky young Iceman and young Maverick, who is known for leaving the team in a limbo since he works better when alone. Just like Hangman and Maverick, the call signs of others too are self explanatory when it comes to their characters or should we say their flying pattern?

The romance between Maverick and his old flame Penny Benjamin, played by Jennifer Connelly, is subtle, yet surreal. At no point it comes off as imposed on the script. Jennifer brings Penny to life, a character which barely got a mention in Top Gun. Monica Barbaro shines as Phoenix and one would like to watch more of her, may be a Top Gun: Phoenix in a decade or later. We are in no hurry! As for the pace and runtime of the movie, it seemed reasonable. The last 10 minutes will make you hang on the edge of your seat. The air combat, in technical terms ‘the dogfight’, is too real even in 2D.

And for those who thought the first installment of the franchise was pro-war, then let us assure you it’s an out and out entertainer. Here the villains have no face nor the power to stop our unarmed heroes from stealing a plane from the enemy territory. If you still can’t make up your mind whether to watch it or not, follow Maverick’s orders, ‘Don’t think, just do it!’