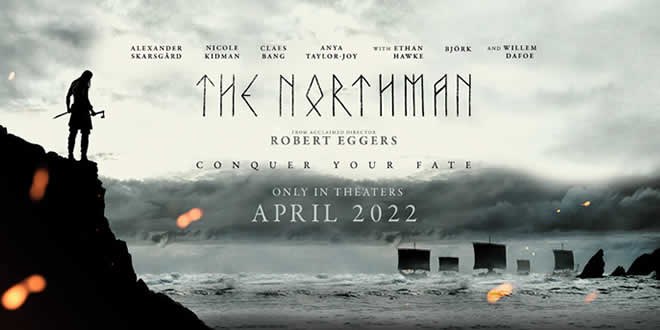 The Northman is an epic revenge thriller, that explores how far a Viking prince will go to seek justice for his murdered father.

The Northman is an upcoming American epic historical film directed by Robert Eggers, co-written by Eggers and Sjón. Set at the turn of the tenth century in Iceland, it stars Alexander Skarsgård as Viking prince Amleth, who sets out on a mission of revenge after his father is murdered by his uncle. Nicole Kidman, Claes Bang, Anya Taylor-Joy, Ethan Hawke, Björk, and Willem Dafoe appear in supporting roles.

Filming took place between August and December 2020, in locations throughout Northern Ireland and the Republic of Ireland. The film is scheduled to be theatrically released in the U.S. on April 22, 2022, by Focus Features, and will be distributed internationally by Universal Pictures.

In October 2019, it was announced that Robert Eggers would direct an epic Viking revenge saga, which he would also co-write with Sjón. Nicole Kidman, Alexander Skarsgård, Anya Taylor-Joy, Bill Skarsgård (Alexander’s brother), and Willem Dafoe were in talks to join the film. They would all be confirmed in December, along with the addition of Claes Bang to the cast. The film was officially in preparation in December 2019, and would begin filming in Belfast in 2020. In August 2020, Björk, along with her daughter Ísadóra Bjarkardóttir Barney, Kate Dickie and Ethan Hawke joined the cast of the film, with Focus Features distributing in North America, and Universal Pictures distributing internationally. In September 2020, Bill Skarsgård announced he had departed the film due to scheduling conflicts. He was later replaced by Gustav Lindh.

Principal photography was to begin in March 2020, but it was halted due to the COVID-19 pandemic. Filming started in August 2020, at Torr Head, County Antrim, and Ballygally near Larne in Northern Ireland. In September 2020, the team began filming in Malin on the scenic Inishowen Peninsula in County Donegal, the Republic of Ireland. Filming was completed early in December 2020.